You are here: Products Our Demons, Best Friends by Diana T. Scott 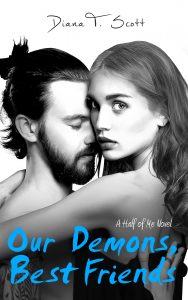 If the perfect world existed, Ava and Sebastian would be in it, in love. But in this world, they are both closely watched by their demons. Their baggage is not light: Ava has hers carefully folded in vacuum bags to occupy as little room as possible; Sebastian wears his like a lead armor that makes him slouch sometimes. They like each other, but how are their demons going to get along?

Writer of Our Demons, Best Friends, Love Me While I’m Gone and Color Me Yours. Perpetually sleep deprived, but never sorry. I am a colorful mix of the things I love. Chocolate eclairs. The sound of a guitar. The first snow of the year. Sleeping on freshly washed sheets. The smell of a new book. Man buns. Using rock-paper-scissors to settle an argument. Old, washed up jeans. Comfort food. Old people acting like kids. The ocean. My dog. My family.

Be the first to review “Our Demons, Best Friends by Diana T. Scott” Cancel reply