You are here: Products Ouch The Diary of a Student Spanker by Charles Marshall 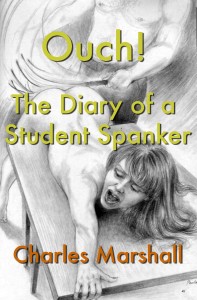 Ouch The Diary of a Student Spanker by Charles Marshall

Charles Marshall is 18 and he’s bored with life in 1960’s Bolton. His attempts to spank his conventional girlfriend Maria have been a disaster and he hopes that his luck will change when he starts college in London. His diary reveals how hard it can be to find love and live an S&M lifestyle. At college Charles lodges with Anita, a mature divorced nurse who’s quite happy to correct him when he steps out of line. He becomes infatuated with her but the spankings and canings she gives him do not lead to the love affair he hopes for – Charles is too young and self-centred for her to take seriously. Heart-broken when Anita throws him out, he takes up with Maria again over the Xmas vacation. Their teacher-pupil spankings re-live the domination part of Charles’s spank mag. fantasies but Maria knows how to stand up for herself – again Charles finds himself at the receiving end of some determined sixties-style feminism. Charles is finding out it’s difficult to choose between the the ‘S’ and the ‘M’; is he perhaps a submissive all along?

In the Spring Term things get better for Charles; he and Anita get back together, this time as lovers, and their stormy relationship now encompasses both sub. and dom. roles. Anita tells Charles how much she enjoys having a younger lover that she can punish whenever he displeases her. But can Charles handle going straight from a carefree student to a serious relationship? Charles and Anita both start to feel trapped – he with an older woman in her thirties, she with a selfish boy obsessed with living out his fantasies. Can their relationship ever work? Things get even trickier when he asks advice from cruel, domineering Astrid, his former careers teacher. Can fellow student Rosemary, a tough athletic Jamaican girl, help him decide? As his first year at college ends events reach a crisis point and Charles gets the chance to prove himself – will he take it?