You are here: Products Origins (The Fullerton Chronicles Book 2) by Brian C. Copper 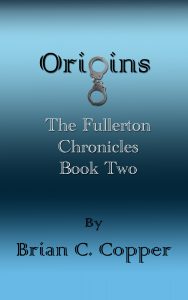 This book is a continuation of the story I began in book 1. It was a self-contained story, but there were lots of options still to be explored. It was nice to be able to delve in deeper to some of the backstory and really get a good look at some of the motivations for why characters did things later in the timeline.

Be the first to review “Origins (The Fullerton Chronicles Book 2) by Brian C. Copper” Cancel reply