You are here: Products Only For Makayla by Melanie Bennett 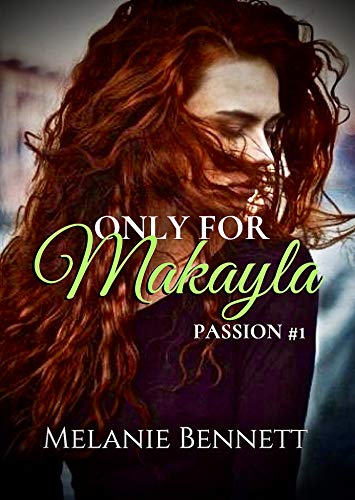 Only For Makayla by Melanie Bennett

Friends to Lovers.
I found Makayla that night.
Her bruised, battered body and crushed spirit, cut my heart to pieces.
The blackest, most sinful part of me, ached to destroy the sick coward. To end his life and have payback for his brutal attack on her.
I made an oath that night.
Our undeniable bond survived, but months have divided us and pushed our fragments so far apart.
I can’t have Makayla and risk my friendship with her brother. But I want her… I need her.
Something buried inside me, knows that she belongs to me, that she is mine.
I made Makayla a promise. But she fights against it with determined stubbornness. I could drop to my knees and beg. Sometimes I want to, but I can’t.
The glimpse of disrespect in her eyes… it would break me.
I know our shattered pieces will fit together perfectly, but will she?
Can she see past the scars and over her walls, that I stand right before her, waiting?

Friends to Lovers, that come together in an explosive, turbulent storm of lustful passion and a complicated love, that was meant to be.

Melanie Bennett is a Canadian Author, addicted to heartfelt Romance. She is fascinated with the elusive, obscure magical moments when new love first ignites.
Her extreme love of books, literature, and reading opened an exciting path to writing. Melanie's romantic tales weave her plots to revolve around family drama, a hint of faith and undeniable love with a storyteller style threaded with aspects of life that touch us all.
While Melanie enjoys writing, which is the perfect outlet for her over-active imagination, reading, landscaping, and music, the family is her everything.
She has fan love for BBC's North and South, Game of Thrones and Outlander.
Melanie is currently finishing the Passion series.
Melanie believes Love always has a plan and that it may find you with a purpose in mind. She believes that when Soul Mates finally find one another, that there is no Heaven, nor no Hell that can keep them apart.
Melanie strives to have her Romance books reflect a balance of everything that makes for a great love story.

My love of the romance genre and my imagination. I have always been an avid reader and my need to tell my stories pushed me to begin writing.

“Raf, what’s the matter? Are you okay?” Makayla whispered, seeing Raf’s face turn a dark shade of red. His reaction alarmed her and she suddenly felt uneasy. Raf’s silence roared in the air between them and after several seconds he answered in a low throaty voice.
“Yeah, I’m just…I’m just so pissed that this happened to you Makayla.” His sad eyes shimmered under a creased brow as his thumb stroked her shoulder.
“I want to hurt him so badly, Makayla. I want him to experience such fear…, and lots of pain.” As a whisper passed his lips.
“I’m going to be fine Raf. If it hadn’t been for you, it would have been worse, right?” Her voice quivered.
“I know, sweetheart.” He nodded, but his face hid nothing. Every mark on Makayla’s body revealed an agonizing expression that appeared chiseled into Raf’s features.
Raf drenched antiseptic over all the welt marks that ran down her arms and wrists. The violent bruising changed from blues to reds and then purple and Raf winced to control his anger. He moved the towel aside, over her slender hips. The black lace of her thong a stark contrast against her silken, ivory skin.
Again, the welts raked over her heart shaped buttocks and down her slender thighs. Large purple finger grab marks framed her hips and dark bruises on the inside of each knee showed where Brad had forced them apart with his own knees. The bite marks on her shoulder and breast had enraged him, but this. This was too much. Raf’s face paled and sweat beaded on his forehead. A sickening sensation lurched in his gut. He could feel a vibrating shudder course through his body.
Seeing the bruises on her hips, the welts on her thighs and bruises between her knees, it threatened his state of mind. It tore at him and he wrestled with it. The evidence of Makayla’s assault she wore on her body. Raf could read every offence. His eyes shimmered with fury and a rage that demanded justice. He pushed down the darkness that wanted to act. It could be so easy to make Brad pay for this. Too easy.
Raf finished up as quickly as he could and had difficulty as he tried to hold it together and help Makayla dress in her t-shirt and yoga pants. He then brushed her hair and once again fastened it into a high ponytail that still reached her lower back, he was fascinated by its silky softness. Tugging the plush pink blanket from the foot of the double bed, he curled his huge frame around her tiny one. The scent from her hair calmed him as he wrapped the warm blanket around them.
“I think I should stay with you tonight, Makayla, if that’s alright. I don’t want you to be alone.”
“I’d like that, I don’t want to be by myself.” She whispered, feeling overwhelmed. The realization of what had almost occurred had inevitably registered after the shock had worn off. Raf’s pained expressions engraved in her mind.
“Raf, why were you here tonight, I thought you were gone for the weekend?” Her voice lazy, soft, and tired.
“I canceled, I just didn’t feel like going. If you’ve been to one party, you’ve been to them all.” His low tone calmed her and kept her grounded. She could feel his heart beating. The heat of his body, his breaths that expanded his ribs, she clung to that. It promised protection, peace of mind and shelter, for now.