You are here: Products One Moonlit Tryst by Amanda Mariel 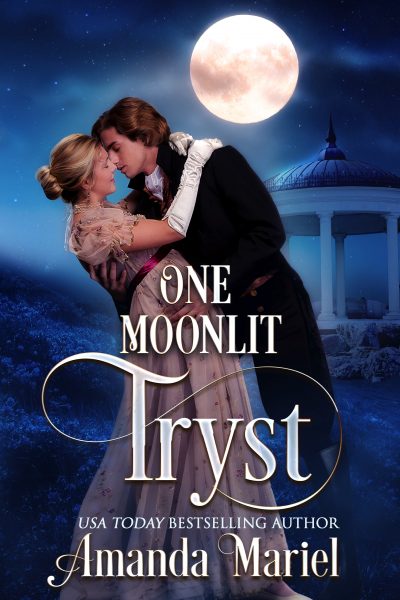 One Moonlit Tryst by Amanda Mariel

Lady Tabitha Pemberton wants nothing more than to enjoy her first season without becoming attached, but when Lady X writes of a forbidden tryst between Tabitha and Colin Brooks, the earl of Harcourt, everything changes. Now Tabitha must choose between her reputation and her desire to remain unattached.

USA Today Bestselling author Amanda Mariel dreams of days gone by when life moved at a slower pace. She enjoys taking pen to paper and exploring historical time periods through her imagination and the written word. When she is not writing she can be found reading, crocheting, traveling, practicing her photography skills, or spending time with her family.

Two of London’s most notorious rogues have returned to town. They were spotted carousing along St. James’s Street mere hours after their return. Ladies beware and mamas keep a close eye on your daughters. No one’s virtue is beyond reproach when faced with the charming nature and good looks of these gentlemen.
~Whispers from Lady X

Colin Brooks, the Earl of Harcourt, burst into laughter as he watched his longtime friend Reginald St. John, the Viscount of Lovell, stroll toward him with pink cheeks and a scowl. “Your arms appear rather empty considering Ginger was supposed to fall right into them.” Colin reached for his tumbler, still brimming with laughter.
“Stuff it.” Reginald took a deep drink of his whiskey as he settled back in his chair. “She would have turned you away as well.”
“Not bloody likely,” Colin said as he glanced across the club at the wench Reginald had been trying to charm. “Shall I prove my point?” He pushed his chair back and stood.
Colin and Reginald had attended school together, and though they’d become fast friends all those years ago, they also had a hunger for competition. They had often chased the same skirts, bet on the same mounts, and played cards for days in an attempt to prove who possessed greater skills.
“Humph. You put too much stock in yourself.” Reginald lifted his tumbler and took another drink of whiskey. “Many women prefer me over your golden looks.”
Colin chuckled, lifting his tumbler. Both men were considered handsome by most; Colin with his sandy-brown hair and light amber eyes stood an inch taller than Reginald who contrasted Colin with black hair and sky blue eyes.
“Nonsense. I simply know how to sweep a woman off her feet better than you do. Where you rely solely on your looks, I possess an abundance of charm.” Colin pivoted on his heels and took a few steps toward the chit before Reginald stopped him.
“Is that so? How about a wager then?”
Colin turned back to his friend, his interest piqued. This would be one bet he was guaranteed to win. Not only because he had confidence in his skills where women were concerned, but also because the chit in question had all but offered herself to him a fortnight ago. He grinned at Reginald as he returned to his seat. “Name your stakes.”
“One thousand pounds says you cannot get the lady of my choosing to fall into your arms.”
Colin arched a brow. “Then we are no longer speaking of Ginger?”
“She may not prove challenge enough to put you in your place.” Reginald gave a dismissive wave of his hand.
“Very well. You name the woman and I will gain her affection.” Colin spread his arms wide. “Anyone of them will do.”
Reginald set his tumbler down and leaned forward. “It will not be one of them, for I wish to make this a true challenge.” He smirked before continuing. “One thousand pounds says you cannot charm Lady Tabitha Pemberton into a kiss.”
“The Pemberton chit?” Colin asked, certain he’d misunderstood.
“Yes, and not the more amiable one either. It must be Tabitha.” Reginald’s eyes glinted, a look of pure amusement overtaking his face.