You are here: Products ONCE UPON A TIGER by Kat SImons 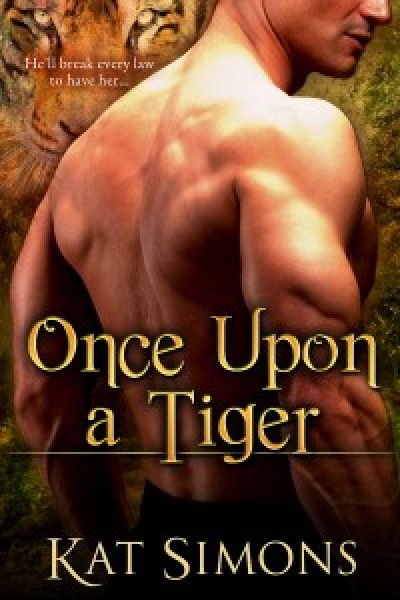 ONCE UPON A TIGER by Kat SImons

Among the tiger shifters, Alexis Tarasova is regarded as fierce and dangerous, with a reputation that would make even the most daring tiger think twice about challenging her. Female tiger shifters may be rare and the Mate Run a critical part of their species’ survival, but Alexis is the only female Tracker and will not back down, even at the threat of Tiger Law. She will not be forced to mate. So when a handful of males band together to force her to participate in the run, Alexis chooses to stand her ground and fight instead.

Outcast from the tiger shifters after a vicious childhood attack left him mute, Victor Romanov has never taken part in the Mate Run. He’s never particularly cared, though, since the woman he loves refuses to take a mate. However, when he learns Alexis may be in danger, all bets are off. Nothing will keep him from her side.

The chemistry between them burns wickedly hot and forges them into an unbeatable pair. Alexis knows that being with Victor means she will have to break another one of her people’s laws—a move that might push the tigers too far. But, for Victor, she will risk everything, including her life, and do what she thought she’d never do—run.

Kat Simons earned her BA in Zoology studying dolphins in Hawaii and her Ph.D. in animal behavior studying deer in Ireland. She takes that background and turns nature on its ear in her paranormal romances. Her Tiger Shifter series follows the struggles of the tiger shapeshifters to survive in the face of extinction and how they handle love, lust and survival. When not writing, Kat loves to read, bake, travel, play with her sons, and go to sporting events with her husband and sons. She also plays entirely too much Sudoku. Currently, Kat lives in New York with her family, her funny little dog, and a library’s worth of books.

A friend suggested I write a short story for an anthology a few years back. I came up with the basic idea behind the Tiger Shifter series–a species on the brink of extinction and doing some unique things to try and prevent that. The ideas behind the extinction issues came from some of the issues faced by the Hawaiian Monk Seals of all things–I took that basis and built on it. The short story was actually accepted into the anthology and the editor and my friend both thought I should write more Tiger stories. So I did.