You are here: Products On the Fly by Katie Kenyhercz 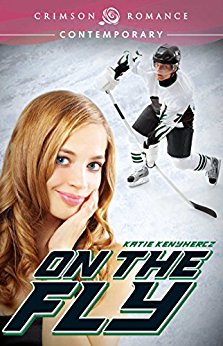 On the Fly by Katie Kenyhercz

Jacey Vaughn has a newly minted MBA when her father dies unexpectedly and leaves her his NHL team. Well-versed in business but not so much in hockey, Jacey navigates this new world with a few stumbles. She definitely doesn’t plan on falling for the team captain. At the first hint of scandal, a local Las Vegas reporter latches on, and Jacey finds herself in the newspaper with headlines that hurt instead of help. Jacey’s determined to keep her father’s legacy alive and make the team successful, but while she has no problem denying her feelings to the media, she can’t lie to herself.

Carter Phlynn has known nothing but hockey his entire life. Drafted into the NHL at age eighteen, winning the Stanley Cup is all he’s ever wanted. Nothing has ever disrupted his focus. Not until he meets his new boss. Jacey gets under his skin like no one else, and while dating the team owner would be a disaster for his career and reputation, he can’t get her out of his head. Carter has never had a relationship last more than a month, but the more he’s around Jacey, the more he can’t picture his future without her.

I like strong, capable heroines who bring out the vulnerability in their tough guys.

Hockey is one of my great loves, and I’m a hopeless romantic, so combining the two just made sense!

Jacey Vaughn clutched a pile of flattened boxes and glanced around the mirrored interior of the elevator. She looked nervous, even to herself, and she swallowed, trying to wipe
her slick palms on the cardboard. It felt like waiting to see the dentist. It was late August, which in Las Vegas meant temperatures in the low 90s. Even though the air conditioning
hit her full blast, a bead of sweat slid down the back of her neck. When the doors opened, she took a deep breath and stepped off. Twenty pairs of eyes peered at her around
cubicles, and she pasted on a weak smile. The glances followed her as she walked down the corridor to her father’s office.
A petite, pixie-like woman in her late thirties darted around a desk with a ring of keys. What her light brown hair lacked in length, it made up for in wavy volume. She wore a
conservative, gray skirt suit and no makeup but big jewelry. The woman smiled and looked her up and down. “You must be Jacey. I’m Nealy Windham, your father’s
assistant. Let me get that for you.” She jiggled a key in the lock until the door swung open then motioned to the papers strewn across the desk and offered a half smile. “You
can’t tell now, but it cleans up pretty well. My extension is two-forty if you need anything.”
Jacey braced herself, stepped inside, and Nealy saw herself out.
“Change is a good thing,” Jacey whispered as she stared at the Stanley Cup
Championship plaques lining the wall. They were from the eighties and the Cleveland Rockers incarnation of the current team but still reflected hockey success. The room
smelled like the cedar and musk of her father’s cologne with a faint undertone of cigar smoke, and she closed her eyes. She could almost feel his presence.
“Hello?”
Jacey gasped, dropped the boxes, and spun around. A man stood in the doorway, solidly built and towered quite a bit over her five feet eight inches, even though she wore
heels. He wore a black Las Vegas Sinners T-shirt, cargo shorts to his knees, and leather flip-flops. His gelled blond spikes were styled to look un-styled, and almond-shaped,
hazel eyes took her in with no attempt at subtlety. A small, slashing scar at the outside corner of his left eye as well as some purple-yellow bruising under his right told her who
he was. Or at least what he was. Hockey player.
“Easy there, didn’t mean to scare you. I’m looking for Mr. Vaughn.”
Her heart contracted at the statement, and she took a slow breath through her nose. When she spoke, there was ice in her voice. “He passed away a week ago.” Didn’t they
know? It was their owner who’d died.
The man narrowed his eyes and crossed his arms. “I know. I meant his son, J.C. Vaughn. The new owner of the team.”
She bit back a smile, and her cheeks warmed. “I’m Jacquelyn Vaughn. My father…called me Jacey.”