You are here: Products On His Knees: the Hunter Dane/Camden Snow origin story by Adira August 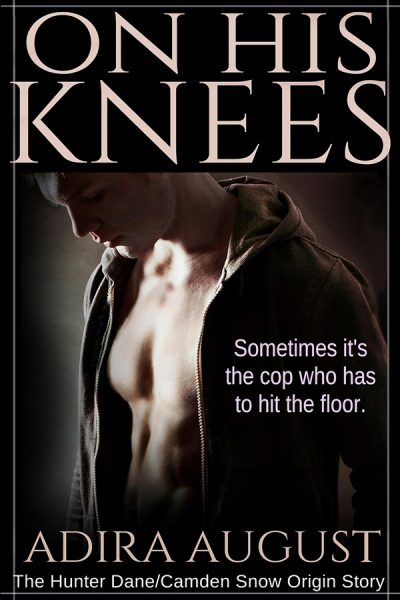 On His Knees: the Hunter Dane/Camden Snow origin story by Adira August

As a homicide cop, every blood-soaked crime scene settled in my bones and snaked around my spine. There was only one way to exorcise the images from my soul …

Inside the club, I stopped to scan the room. He was here, Camden Snow. A Norse sex god in the guise of unpretentious youth. Only his ice-blue eyes gave evidence of the Dom who took whomever he wished, whatever way he wanted, with a look and a nod. Merciless.

Cam found me watching him and fixed me with his arctic gaze. This time, I didn't walk away. He cocked an eyebrow. Well?

The last thing I needed was mercy.

I dropped to my knees.

I went to school interminably, it seemed like. I studied anthropology and paleontology and genetics and literature and theology and ancient Greek. I chased down bad guys, raised children, climbed mountains, played poker, searched for dinosaurs and have had a rather large number of lovers. (I'm not giving up any numbers because TMI) Through it all, I wrote.

No wonder I'm so tired.

It was an early summer evening, the sun half set. I was making my way to the door with one of the club’s boozeless Bloody Marys to find a deck chair and keep an eye on whoever came up the stairs. Decide what I wanted after sunset.

The door opened before I could touch it. He paused, backlit by the setting sun. Golden. Glowing. Idealized male beauty wrapped in an invisible cloak of incredible power. He was so careless of it. He scanned me and grinned. As if the sight of me delighted him. No one grinned here. Not with genuine pleasure.

He passed close to me, still scanning. It was the kind of moment that called for locked gazes and hardening cocks. Instead, he happily looked me over like I was a pastry display and he was deciding which succulent treat to select.

Cam was all of twenty-one. Fresh from deep powder and Olympic triumph. Exuding health and vitality and bonhomie and danger.

I wanted to give him everything, simply because he existed. And looked at me.

He reached out and put a hand on the side of my neck, his thumb skating lightly along my jawline and down, across my larynx. My insides turned to water.

His eyes narrowed a little as if he'd heard. His hand tightened – scarcely, definitely – and withdrew.
"Kneel for me when you’re ready," he said. And was gone.

For over two years his sporadic appearances were cause for club-wide celebration. He quickly acquired his own mythos. Cam demanded all. No negotiations. No safewords. Not compliance nor submission. He accepted only perfect and complete surrender.

It was why we'd never been together. I was often hungry for the screaming release only another man was strong enough to bring me, the safety of control that excited and humiliated me, the pain I feared and longed for.

We’d never spoken. But when he was in the club, I'd find his weighted gaze on me when I entered, and pass his table with my head turned away.

I found him tonight, as always, already aware of me – waiting for me to find him. Surrounded by men and a few women. Gently smiling.

This time, I didn't look away.

Cam stopped smiling. His eyes narrowed and slid down my pecs and abs like a strong warm palm. I felt myself opening to him, right there, half-blocking the way of people coming in behind me. My body turning more fully toward him, my arms falling loosely, palms up.

His minions noticed his attention had lasered in on me. Cam's chin came up, his head back, his gaze not challenging, but direct. ::You know my terms.::

A frisson of fear spiked adrenaline through my system. My balls drew up, but my cock rolled over – I could still walk past him.

……….. We opened the door with a pry bar. Another bedroom. A single closet. A messy bed. Huge pictures on the wall, like rock band posters …

Cam relaxed into the curve of a horseshoe sofa, arms stretched along the back. Legs extended and crossed at the ankle. A relentless patience I was helpless to contend with.

…………. but these were pictures of screaming faces and ripped open bodies. He'd slept here; his victims' torment brought him peace. ………….

The club’s sounds subsided as those nearby became aware of the dynamic in play between Cam and myself. Anticipating. Hoping. Knowing he did what he wanted, where he wanted. In private or public. Merciless.
He tilted his head. ::Well?::

The last thing I needed was mercy.

I dropped to my knees.

CAM
::Hunter Dane went to his knees for me.:: Camden Snow stopped breathing for a moment. Everything else receded – the club, the music, the people. Only Hunter remained, bright in a nimbus of light, a single player on the stage of the world, waiting for his cue.

The sight of him, straight and tall even with his head bowed, made Cam so hard, so fast, he thought his cockhead would breach his zipper. Hunter was the one he watched for. Dark. Damaged. Sculpted. Haunting and haunted. He moved with the confident grace of a man not just fit, but field-tested.

Cam longed to shatter him, so all his fiery molten interior exploded outward. He'd wanted it from that very first night, stunned by the depth of the dark man's raw need for his own obliteration. Cam knew instinctively how to get him there.

Now, Hunter Dane waited on his knees and it was up to Cam to break him. At twenty-one, Cam had known how. But the time spent honing his skill and confirming his instincts on the cries and bodies of other men, gave him the experience to break the powerful Dane without crushing him.

Hunter Dane was a control-freak among subs; his limits exact and inviolable. His obedience calculated to the millimeter. Hunter hid himself inside himself and used a Dom far more thoroughly than any Dom used him. And so, until tonight, he’d walked past Cam, knowing he brooked no boundaries.

He became aware of a bit of low laughter and a rising murmur around him. The crowd was restive – expectant. But Cam never hurried. Every man he took trusted him completely, and every one deserved the very best he could give them.

For Hunter, complex and caged inside himself, Cam remained poised at the gate. The members looked back and forth from the dark figure on the floor to the blond sex god who seemed to be ignoring him for a more interesting text. A second low laugh reached him.

Chez Cannon appeared from the back of the club. Cam gave a slight lift of his chin and Chez hurried to his table. He leaned over to hear Cam’s whispered instructions. Chez nodded he understood, and moved off toward the play rooms.

Be the first to review “On His Knees: the Hunter Dane/Camden Snow origin story by Adira August” Cancel reply