You are here: Products Old Sins, Long Shadows by B.D.Hawkey 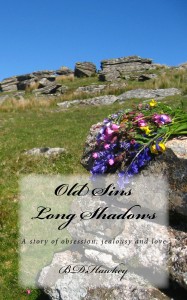 In 1868 a young woman starts a journey of self discovery and love. Yet there are those who wish her harm. Old sins cast long shadows which risk destroying her, the people she cares about and her capacity to love again.

Abandoned by her father and rejected by her mother, financial difficulties and a desire to win back her mother’s love forces Janey to enter service where she quickly rises through the ranks. Upon her arrival to the elegant Cornish Country Estate, she successfully secures a position of a lady’s maid for the wealthy and powerful Brockenshaw family. An exchange of letters between Lady Brockenshaw and her son ignites Janey’s interest, but Janey’s feelings for this mysterious and charming gentleman soon change her life forever.

Old Sins, Long Shadows is a Cornish Victorian romance set against the backdrop of the magnificent Bosvenna Estate and the sweeping dramatic hills of Bodmin Moor in Cornwall. Janey Carhart’s story is a tale of obsession, jealousy and love.

I am married with two grown up children.

I love to read historical romances. I also love Cornwall in England. The countryside is very inspirational, dramatic and romantic. I have always had the desire to write and I decided to combine my two passions and write a historical romance set in the county I love.

Be the first to review “Old Sins, Long Shadows by B.D.Hawkey” Cancel reply