You are here: Products Office Confidential by Brooke Berkley 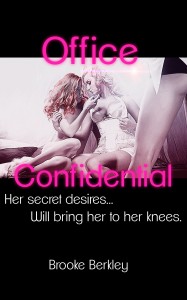 If you enjoyed this book then please share the love and rate my book.

I like this kind of erotica – it fascinates me

Office confidential
Molly loved her job, well most of it anyway. Securing such a great career start straight out of college working for a major corporation and such a charismatic boss as Alison made the downsides bearable. Alison worked her hard; a powerful aggressive career women who knew exactly what she wanted and made sure she got it.
Molly felt in awe of her boss, smart, sexy with a designer wardrobe to die for and a determination that whatever it took to get the deals done happened so that she would maintain her enviable position as the top of the corporation’s powerbase.
The worst part were the business trips, not only did it take Molly away from her college sweetheart boyfriend Dan but Alison’s demands meant Molly became just a glorified gofer, limo driver, secretary and general dogsbody – at Alison’s every beck & call, 24/7, however she never believed not in a million years that she’d be experiencing lesbian office sex and enjoying it, after all she straight, hetro sexual not even bi-curious surely?
What Molly didn’t realise until one night in a dim, crowded, sweaty nightclub, there was more to Alison, a darker side. A side that initially shocked, frightened and appalled her, but then suddenly engulfed her into a world of erotica, sexual domination, and forbidden lesbian passion that she was powerless to resist until that night …………
It took this dark, hot and sleazy club for her to experience First time lesbian sex, and then a lesbian threesome.
How a new experience can change someone’s life suddenly, Molly after having sex with her boss, she ditches her boyfriend to ensure that her office life is not compromised and that she can devote her time to the lesbian domination to which he boss has introduced to her
“Everyone has secrets, and some people even keep secrets from themselves.”