You are here: Products Off Limits by Nicole, on behalf of Ruby dixon 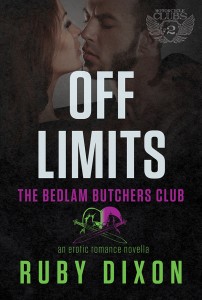 Off Limits by Nicole, on behalf of Ruby dixon

He shouldn’t touch me, but he does.

Late one night, in the middle of danger, he makes me feel things I shouldn’t.

And I know I shouldn’t want more…but I do.

Because hooking up with me? It could cost him his life.

Lucky…isn’t. In fact, she’s considered ‘off limits’ to the Bedlam Butchers because she’s caused them nothing but bad luck in the past. As a bonus? She’s also the president’s kid sister. Single and lonely? That’s Lucky’s way of life. Now, the Eighty-Eight Henchmen are harassing her and they’re out for blood.

Solo…is. In a club where pairing up with a brother to watch your back is mandatory, Solo still hasn’t gotten over his partner’s death two years ago. The club’s pressuring him to name a second Treasurer, but he has to trust that person in bed and out. And it’s damn hard for Solo to trust.

But when he rescues Lucky from the Eighty-Eight, maybe it’s time for Solo to find a partner, and time for Lucky’s luck to turn around…

We also know how difficult it can be to carve out time for a full-length novel…and reading a book in parts isn’t always as satisfying. Our series is written for the busy romance reader in mind. In each story, you’ll find scorching heat, wild emotion, and a romance that will have you turning the last page with a happy sigh.

Be the first to review “Off Limits by Nicole, on behalf of Ruby dixon” Cancel reply