You are here: Products Observation by Quinn Rawling 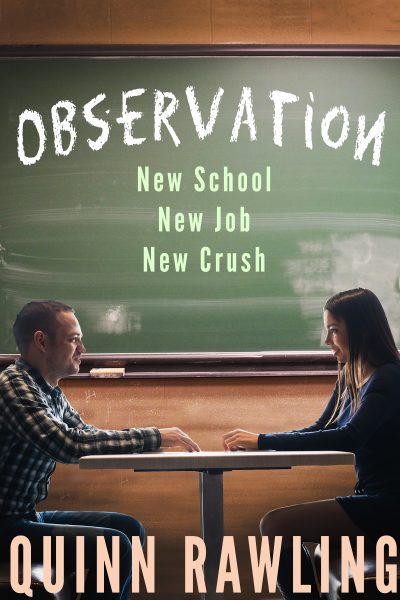 Teaching high school is hard, and when you’re fresh out of college there is a legitimate pecking order when it comes to staff, faculty, tenured faculty, and administration. I just wanted to show up, decorate my classroom, and inspire these teenagers to be the best students they can be.

Why did the assistant principal have to be so handsome?

Now, it’s hard to focus on teaching when every meeting I have with him hints at something more. High school drama. If only the students knew what happened behind the teachers’ lounge door.

Quinn Rawling lives in Kentucky with her husband and two dogs.

When she’s not reading, she’s baking, crocheting, or binge-watching Friends for hundreth time.

Or writing. She does that too.

She grew up in Florida and is currently living in Kentucky with her husband. She studied English education at University of Florida and taught for several years before becoming a writer. She loves baking, reading, making people laugh, and gossip.

I am a teacher, and it's always seemed odd to me that people don't seem to think about teachers' personal lives. They're real human beings with real problems, dreams, desires, and shortcomings.

As Erin carried the box of posters down the tenth grade hallway, her steps echoed into the darkness. This was the first time she had been in a school during summer vacation and the emptiness made her uneasy. She knew it was silly, but she gripped the box tighter and quickened her step as she passed battered gray lockers on white walls, occasionally broken up with a neon pink or green poster telling her to “Soar like an Eagle this September!” Her classroom was just three doors down, next to the teachers’ lounge. She could see the light streaming out of her door and hear the music trilling out of her tinny desktop speakers. It was so strange to think of those things as “hers.” After thirteen increasingly awkward years in school, four years of college, and one grueling semester as a student teacher, this was it. She was the teacher.
She paused in front of the door. It was plain, nondescript door, pale pine with a skinny window in the top right corner, but this door was hers. The little black nameplate above the room number said “Mrs. Butler.” She would have to talk to someone about that. She was wondering who she would have to call when a voice called out from behind her.
“Miss Butler, can I have a hall pass? Miss Butler, my pencil is broken! Miss Butler, I—” Erin whirled around, her Great Gatsby movie poster flew out of the box and bounced silently on the linoleum. The poster slid to a halt in front of a woman about her age. “—can’t find my notebook. Hey, I’m Cassidy, your next-door neighbor.” Erin had to look up to see Cassidy’s face. She was probably over six feet tall and looked like the girls on the volleyball posters Erin would sometimes see on campus back in college: blonde and cheerful but also intimidating and statuesque. She had her hair up in a ponytail and was wearing a shirt that said, “Never trust an atom, they make up everything.”
“Oh, uh, hi. I’m Erin . . . Butler.”
“Let me help you with Leo there.” Cassidy reached down for the poster and walked into Erin’s room. “You have some decorating to do, I see!”
Erin stood alone in the hallway for second, processing what had just happened, before following Cassidy into the room. “Yeah, I haven’t had much time to get in here. I was just offered the job last week. I heard they had to fire the last teacher?”
Cassidy sighed from across the room. She was holding the poster up to different spaces on the cinderblock wall. “Yeah, I’ll miss Gina. I guess that’s what happens when you try to read American Psycho with your sophomore English class.” She shrugged and walked to the desk to get tape.
Erin considered joining her in putting up the posters, but Cassidy seemed to have a vision of what her room should look like, so she leaned back onto an empty desk and watched as Cassidy marched between the box full of posters and the various walls. Occasionally, she would pause and turn in place, assessing each of the blank spaces remaining before making her decision. “Are you always this chatty?” she smirked at Erin while she taped up the classroom rules.
“I didn’t want to disrupt your creative process,” Erin retorted. “I mean, it’s obviously super important to you how my room looks.”
Cassidy turned towards Erin and, for a second, Erin was afraid her sarcasm hadn’t been clear, but then Cassidy threw back her head and gave a bark of a laugh before saying, “Well, one ugly room can bring an entire hallway down, you know. It’s my civic duty to make sure you don’t screw things up.”
As she watched Cassidy’s blonde ponytail bobbing across the room, Erin’s uneasiness faded. Admittedly, Cassidy was doing a much better job than Erin could have to brighten up the dull room. The cinder block walls were painted a dark cream, spotted with old pieces of tape, sticky tack, and mystery gunk. The carpet was the same carpet found in every school, that blend of blue, purple, and red that looked like nothing but would yield a limitless amount of designs if you stared long enough in the same spot without blinking. Her desk was barely larger than the students’. Her computer monitor sat dangerously close to the edge, as if the keyboard was trying to talk it down from jumping. Cassidy seemed to be placing most of the more motivational posters in that corner of the room, so maybe she, too, could sense its desperation.

Cassidy had assigned almost every poster to its spot when there was a knock on the open door. She turned and rolled her eyes. “Grant, the door is open. Did you really feel like you needed to knock?”
The man standing in the door was slightly shorter than Cassidy, with dark brown hair that Erin thought looked as if he ran his hands through it whenever he was nervous, which must have been often. He was wearing a green gingham shirt and a navy blue tie. He glanced at Erin and smiled before, as she suspected, lifting a hand to his dark hair. Erin started to introduce herself, but Cassidy cut in. “Grant. School hasn’t started yet. You have three more days of freedom. Why are you wearing a tie?”
“I don’t feel like a teacher unless I’m wearing a tie.” He put his hands in his pockets and took a few steps into the room. “I don’t know how you can write lesson plans in sweats. I feel like an imposter.”
“You’re such a loser,” Cassidy laughed. “Have you met Erin? She’ll be joining us here on the Shark Team.”
“Shark Team?” Erin asked.
Grant scoffed and leaned against the vacant desk next to her. “It’s some team building thing Chambers read about in a journal somewhere. Each class has a name. It’s supposed to stop bullying or something. We’re the Sophomore Sharks.”
“And the juniors are the Junior Jaguars, not the Jets, which is ridiculous. How are we supposed to coordinate gang dance fights if we don’t even have the proper names?” Cassidy was slowly revolving in one spot, surveying her work.
Erin turned to Grant, “Who’s Chambers?”
“He’s the assistant principal slash counselor,” said Grant.
“Why does he do both?”
“Budget cuts,” Grant and Cassidy said at the same time, then laughed.
Cassidy sat down on the other side of Erin. “He used to teach history in this hall, but then he got his masters, which means he spends his days in the main office,” she put on a nasally, snobbish accent, “drinking brandy, smoking cigars, and trying to help out the little people.”
Erin laughed, “Are we the little people in this scenario? Or are the students?”
Cassidy laughed, “Both, I guess? Really, it was a favor to the female student population that he left the classroom. Test scores were dropping. The poor things couldn’t focus on the religious revival when they were having their own Great Awakening, if you know what I—”
“Have you been to Paris?” Grant interrupted, his eyebrows furrowed. He was looking at Erin’s poster of the Eiffel Tower.
“No, um, I’ve always wanted to.” Grant turned back to look at Erin as she spoke. “I actually applied for a job in France, teaching English as a second language. I . . . didn’t get it.”
“No offense,” said Cassidy, leaning forward, “but I figured that you probably didn’t pass up on France for Anchorage, Kentucky.”
“They said they wanted someone with more experience. That I should teach for at least a year before applying again.”
“Oh, I see.” Cassidy rolled her eyes dramatically, “We’re just a placeholder for you until you get your real dream job.”
“Yeah, basically,” Erin replied, smirking. The corner of Grant’s mouth twitched upward as he looked back at the poster.
Cassidy stood up as if to leave in a huff and stomped through the crooked rows of desks until she reached the door, where she stopped suddenly, putting her hand on the doorway and looking backwards at Grant and Erin. “Coming to the meeting?” she said with a smile.

Be the first to review “Observation by Quinn Rawling” Cancel reply