You are here: Products obey (Companion Academy Volume One) by Sierra Black 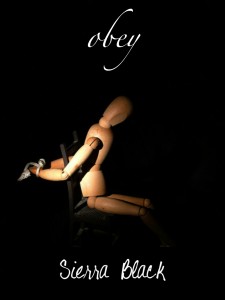 Humankind has settled many worlds, and society’s values have changed. The most valued people in all the worlds are Companions, professional Submissives who pleasure the rich while holding the most respected spots in society. The highest dream of almost every young person is to become a Companion. Or to own one.

Miri finds herself without a viable future, but is surprised to find herself accepted into Companion Academy. The exclusive school is the only entry into the highest forms of society. There she will learn to turn pain into pleasure, to submit to any Master or Mistress who owns her contract, and to obey when her deepest instincts tell her to fight back against everything being done to her body and mind.

Miri’s first shocking few days at Companion Academy show her the first limits she owns that she must move past, and how pain and pleasure, want and need, can all be combined to turn an innocent young woman into the ultimate sexual submissive, a Companion.

This is a sexy homage to the character Innara in Firefly. The concept of Companions has always fascinated me, and this is a naughty twist on the idea.

Master Licke stood at the head of the room once again.
“The most important thing you will learn today is that Companions are submissive. They do whatever their master or mistress ask of them without question. It might seem that Companions are slaves, or sexual servants, but in fact they are the ones with all the power. No master or mistress can require any Companion to do anything with prior permission. You have to agree to enter into a contract, agree to join in a union, or agree to a short-term arrangement. You also have the option of stopping the contract at any time, with the simple use of one word. If you feel you can no longer submit to the actions required of you, speak this word, known as a safeword. All actions will stop and you will no longer be required to have contract with that mistress or master. The contract will be broken. Use your safeword carefully, as there is no going back once it is spoken. All masters and mistresses know they exist in their world at your whim, and you can change the situation at any time. So, no matter how it looks, you really have the ultimate power.
“It is time to choose your safeword. Think of a word that you can easily remember, but that won’t come up in regular conversation. Type your name and safeword into the screen on your desk to record it for use during your stay here. All the instructors here will know everyone’s safeword. If you feel the need to use yours, it will be acknowledged immediately and your training will stop. You will be allowed to pack and transportation will be provided so you may return home. If you use this word before tomorrow evening you will have one more chance to attempt another class. After that day, you will never be allowed into the program again. Keep your safeword to yourself and only consider using it as a last resort. Part of your training here is to learn your limits, and to learn how to surpass them. Your first lesson will test that right now.” He indicated that we should stand and follow him, then led us out of the room down the hall toward a large, ornate door. We filed in to find a room filled with benches in the round, with a short stage situated in the very center. It measured about 12 feet across and was covered in thick, rich carpeting.
Mistress Gold, Master Licke, and others who were obviously other instructors gathered at the back of the room, guiding all of us to the benches facing the stage. Mistress Gold strode through the aisle and mounted the stage.
“You’ve gone through the first phase of orientation and chosen your safewords. Now you will begin to learn about submission and obeying as a Companion should. Each of your spots on the benches has a number attached. I will choose three numbers at a time. When your number is called, walk up to the stage for your first lesson.” I hoped I wasn’t among the first group called, so that I could learn what was coming, but it wasn’t to be. It was me, Lee, and a man I hadn’t yet met. We all climbed the stairs and looked around, warily.
“Position yourselves so that you are all facing a different part of the audience, then stand sideways to the benches,” said Mistress Gold. A door opened and three men walked through, all older and somewhat overweight. They moved so that each of them was behind one of us students, and they pushed down on our shoulders to force us to our knees.
“You must do as the client wishes immediately, with no reservations. Each of you should get on all fours and lift your skirts or kilts to reveal your backside. The clients will do what they wish with you after this.”
I gasped, shaking a little at the suddenness of it all. Ten minutes ago I was sitting in a classroom, and now I was to be taken by a perfect stranger in front of all my classmates. My client put his meaty hand on the back of my neck, pushing me down into the correct position. He reached around and fondled my breasts, pinching and tweaking my nipples until they sang with smart pain. I could feel his thick…