You are here: Products Now or Never by Stacy-Deanne 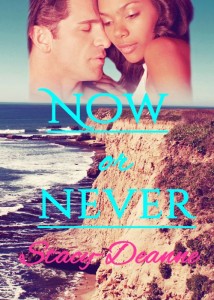 Now or Never by Stacy-Deanne

While investigating the murder of Brett Myers, homicide detective Alexis Adams finds a possible connection between Myers’ murder and Grant Copeland, the most powerful man in town. Alexis has recently moved back to Tate Valley, California and has never forgotten how Grant ruined her mother’s life.

Alexis becomes sidetracked when the case leads her to Kevin Reed, her first love who still holds a grudge for her leaving nineteen years earlier. Kevin is in line to become CEO of Copeland Enterprises and though Alexis and Kevin clash because of this, they can’t ignore how strong their feelings are for each other.

Alexis has wanted Kevin for years and finally has a second chance at love, but can she let go of her hatred for Grant or will it destroy everything she’s wished for?

With Stacy every book is an adventure.

Relaxing in the rocking chair on her Nantucket-style beach house porch, Alexis took a hit of her cigarette.
She definitely wasn’t used to this carefree living, but being Stossel Adams’ daughter had its perks. Everyone in Tate Valley loved Stossel and the few who knew she had returned pulled out the welcome mat. She’d gotten a decent deal on this house down from the beach. Lord knows she wouldn’t be able to live in this upper class area if it hadn’t been for Stossel’s real estate friend. Funny how much she could love sitting on this porch yet hate everything Tate Valley stood for.
Yet this small, southern California town was her home, bumps and all. She could go to Mars, but this would always be her home. Even if Grant Copeland still lived in it.
“Shit.” She puffed on the cigarette. “Home sweet home, my ass.”
Her blood boiled whenever she thought of being back in the same town as Grant, but images of Kevin would always pop into her head and she’d immediately calm down.
Would he ever forgive me for leaving?
Sure she expected him to hold a grudge for not contacting him all these years, but she hadn’t expected such a cold response. While she and Kevin had bumped heads about him working for Grant, Alexis couldn’t ignore the fire he brewed inside of her.
Her nipples tightened and her crotch throbbed at the thought of having Kevin back in her arms and in between her legs. If she had the chance she’d never let him go again. Wild horses and an army of a thousand men couldn’t drag her away now. Kevin would be the only thing worth putting up with Grant for the next twenty years.
She stopped rocking in her chair.
But would he ever forgive her? The question would go on and on in her head until she knew if he would.
A car motor sounded in the distance followed by shimmering car lights.
A silver-gray Porsche 911 Carrera S came up the sandy road and stopped in front of her house.
She pulled the cigarette from her lips.
Holy shit.
Kevin got out and walked toward her without a hair out of place despite the strong breeze. His Salvatore Ferragamo Python loafers sank into the sand with each step.
“Jesus, here we go.” Alexis flicked her cigarette in the ashtray.
For years she’d had erotic dreams of Kevin walking up to her porch, taking her in his arms and putting it deep inside of her until she couldn’t scream anymore.
But her womanly instinct told her that wasn’t exactly why he was there.
Kevin’s slender lips curved into a frown when he approached the porch. “Here.” He tossed her a gold, hoop earring.
“My earring.” She examined it. “I wondered what happened to it.”
“Now you know.” He turned to leave.
“Hold on.” She leaned forward in the chair. “You don’t mean to tell me you came all the way over here to bring me my earring?”
“It’s the truth.” He poked his lips out as if he were fighting to stay mad.
“Kevin.” She sat back, smirking. “Just like you know me, I know you. You wanted to see me didn’t you?”
“I’ve wanted to see you for the last nineteen years.” He displayed a smile that she knew wasn’t sincere. “But that didn’t matter to you did it?”
She sighed, looking at the earring. “All I can say is I’m sorry if I hurt you.”
“If?” He chuckled. “I was so in love with you, Lexi, you can’t even imagine. I would’ve done anything for you. You were my first love. We lost our virginity to each other for God’s sake.”
She closed her eyes. “Kevin—”
“I would’ve done anything for you, Lexi. You remember before you left when we were out on the beach?”
“Of course.” She swallowed, thinking of that glorious memory once again. “I couldn’t forget anything from that moment. I remember how you smelled and how good it felt when you touched me.”
“Remember what you said?” He put his foot up on one of the porch steps. “You said we’d always keep in touch and that you wouldn’t forget me.”
“And I never forgot you, Kevin.” She touched her chest. “The way you felt about me is exactly how I felt about you. I would’ve died for you. I wanted to marry you one day.”
“Hmm.” He frowned. “I guess I should be flattered, huh?”
“No but can’t you try to forgive me? I know it was awful that I didn’t keep in touch but everything about this place reminded me of the pain Grant caused my family and I just wanted to forget that.”