You are here: Products Notice Me (Holton Series #2) by B. L. Blair 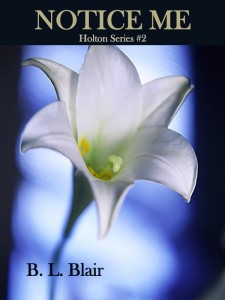 Andrew Moore had always thought of Victoria as family. She was his best friend’s little sister and his little sister’s best friend but recently something had changed and Andrew was thinking about Victoria in a completely different way. She would never fit into his quiet, conservative world. They were too different to have a future together but he couldn’t help noticing her.

Victoria Carson has been in love with Andrew since her sixteenth birthday but Andrew never noticed her as anything other than his best friend’s little sister. Victoria fled from her hometown so that she wouldn’t have to watch Andrew build a life with someone else. But things had changed. Andrew was now a widower and Victoria had returned home. It was time to make him notice her.

She is the author of the Holton romance series and The Good, a contemporary fantasy novella. She loves reading books, writing books, and traveling wherever and as often as time and money allows. She is currently working on her latest book set in Texas, where she lives with her sisters and her cat, Darcy.

I had introduced Victoria in the first Holton book and just knew she needed a story of her own.

Be the first to review “Notice Me (Holton Series #2) by B. L. Blair” Cancel reply