You are here: Products Norseman’s Deceptio, Book 2 The Norsemen Sagas by Gianna Simone 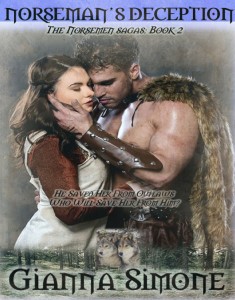 ** He saved her life – can the gods save her heart and soul from the mysterious loner’s dark desires? **

Fearing an arranged marriage, Thora Korisdotter flees her village, vowing never to return. With her two pet wolves beside her, she is confident in her safety, protected by the loyal animals. But outlaws attack, wounding one of her beloved pets. Only a mysterious stranger saves her from certain death. Now in his debt, she must repay him as he asks – with her body.

After being cast out of his clan as an outlaw, Ari Hugisson has wandered for years. The time of his banishment is nearing its end, and Ari has the proof he needs to clear his name and unmask the real murderer – his brother. His journey is delayed when he comes across a beautiful woman under attack. Compelled to save her, he also knows exactly how to claim the debt she owes, using the passion lurking under the surface of her fiery nature.

Betrayal cuts deep with the revelation Ari has lied and knows well the man Thora was to wed. But the passion he stirs is unlike anything she has ever known, even if he insists on treating her as little more than a slave.

When Ari confronts those who would see him killed, will Thora stand beside him, even at the risk of losing her family – and her heart?

Keep an eye out for my next book in the The Norsemen Sagas – also featuring A Kinky Twist on History! and more deliciously dominating Vikings!

I’ve always been intrigued by Vikings and I started the first book in The Norsemen Sagas, Norseman’s Revenge, right around the time the History Channel’s Viking series began. That show helped motivate me, even if it took another two years of an experiment to get this series released.

“Here.”
Ari held the small jar of salve before ThoraShe looked up, shivering under the intensity of his stare. Knowing that he’d likely remain over the next days until Kata recovered enough to travel set her heart to racing again, as well as her thoughts, imagining what would pass between them in that time. She took the salve, suppressing a quiver when their fingers brushed.
She forced her focus on Kata, applying the paste to the wound. The wolf whined, but made no attempt to evade Thora’s attentions. When she drew away, Ari handed her a fresh strip of cloth to cover the injury.
Sitting back, she spotted Kati approaching, three fat squirrels dangling from his jaws. He trotted over, laying the animals before his sister. He nuzzled Thora and sat, watching Kata as intently as she.
Kata’s head rose up and she rested her forelegs before her, ears perked forward. The sight encouraged Thora’s heart. Tears burned her eyes when Kata leaned toward the squirrels, taking one in her mouth and eating eagerly. Thora stroked Kati’s head, thrilled the she-wolf’s appetite had returned, and so quickly. Another sign her pet would recover.
“Go, find yourself a meal.” She whispered the words against Kati’s ear and turned to find Ari watching her. A wave of heat ran along her spine seeing the force of his stare. Flashes of the night before, of his wicked and dark games, roused a hunger that startled her with its ferocity. Ari had introduced her to delights she’d never imagined, never thought to want so deeply, even as she also resisted the urge to offer herself completely to his control.
Yet a frightening aspect cooled the heat. How had he, in less than a day, found a way to make her want to give in to every one of his debauched demands? Yes, he most definitely posed a greater danger than her attackers. She must attempt once more to free herself from his claim. She took a deep breath and stood, holding the jar out to him.
“This is very powerful salve. Where did you get it?”
He shrugged. “At market somewhere. I can’t recall.”
“In my village, we have a woman who creates similar healing draughts and ointments, but I don’t think she’s ever made this.”
She twisted her hands before her. She doubted he would go along with her suggestion, but she had to try.
“Kata is healing nicely, but it will be at least another several days before she can travel again.”
Truthfully, she worried even that wasn’t enough time, but she kept that concern to herself. Here was another chance to separate herself from him.
Ari nodded. “I understand.”
“So, we shouldn’t delay you anymore. In the morning, you can be on your way. Staying here with me will hinder your journey, perhaps ruin your chance to reach The Thing.”
He chuckled, walking to stand before her. He was still naked and Thora forced herself to look only into his face.
“I’m not going anywhere, ástin minn.”
Did he think to soften her by using wooing words and calling her his dear? “But The Thing –”
“Have you forgotten my conditions? I am to decide when you’ve fully repaid me.”
Her eyes widened before she scowled. “Last night wasn’t enough for you?”
“I fear a thousand nights may never be enough.”

Be the first to review “Norseman’s Deceptio, Book 2 The Norsemen Sagas by Gianna Simone” Cancel reply