You are here: Products Normal for Norfolk (The Thelonious T. Bear Chronicles) by Mitzi Szereto (co-authored with Teddy Tedaloo) 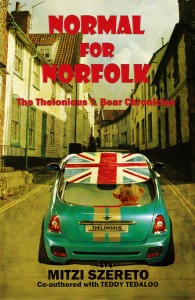 Pub landlords are being murdered in Norfolk!

Thelonious T. Bear, ursine photojournalist, leaves behind the big city life of London to take an assignment in the Norfolk countryside, where he hopes to find the real England. Instead he stumbles upon gastro-pubs, crazed Audi drivers and murder. As the hapless Thelonious keeps ending up in the wrong place at the wrong time, he attracts the attention of Detective Chief Inspector Horatio Sidebottom of Norfolk Constabulary CID, who’s determined to tie Thelonious to the crimes. Add in a pair of hoods from London’s East End, celebrity TV chef Paolo Louis Black, and plenty of oddball local characters and it all adds up to a madcap journey through England’s most quirky county, where everything is normal (for Norfolk)!

TEDDY TEDALOO is a celebrity teddy bear, trendsetter, world traveller, and the production assistant extraordinaire/co-star of the web TV channel MITZI TV, which covers “quirky” London. Widely popular in social media circles such as Facebook and Twitter, he’s known for his entertaining commentary and opinions as well as being an advocate for animal welfare. He lives (and goes) wherever Mitzi lives (and goes). Normal for Norfolk is his first novel.

My celebrity bear inspired me to join forces with him in this quirky crime/cozy mystery novel. An extended visit to Norfolk, England set the stage – and the entire plot came together on a scrap of paper while enjoying a pint of local ale in a village pub. The rest, as they say, is history! (Or at least Normal… for Norfolk.)

Be the first to review “Normal for Norfolk (The Thelonious T. Bear Chronicles) by Mitzi Szereto (co-authored with Teddy Tedaloo)” Cancel reply