You are here: Products No Gentleman Is He by Lynette Willows 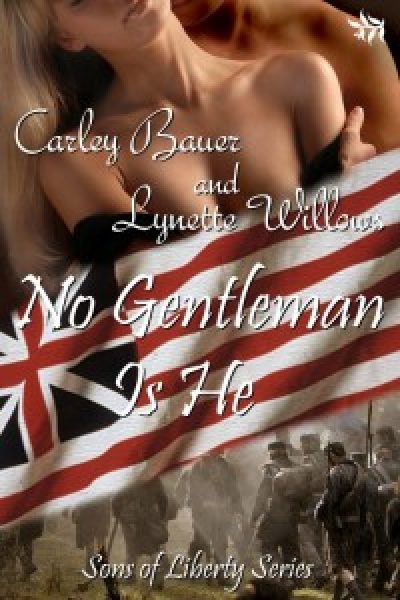 No Gentleman Is He by Lynette Willows

Young, adventurous and widowed in a new land, Cassandra Courtney Brooks found her dream of raising a superior breed of saddle horse slipping away with the death of her husband. Left with four horses, living in a tavern attic and her scant savings depleted, she resolved to see her vision to fruition by accepting the scandalous position of steward at Varina Farms. Cassandra is soon forced to question the wisdom of her decision when she finds herself enamored with the lusty and dangerous owner.

Born in the image of his dark-skinned ancestor, Pocahontas, it was rumored Colton Rolfe carried the savagery of his Indian heritage. Scorned by his father, Colt grew into a man of ill temperament who’s only true love was the wild equine beasts on his Virginian tobacco plantation. His desire to breed his horses with the superior Saddlebreds of the newly widowed Cassandra Brooks led him to abandon societal rules.

Their story unfolds with Colt’s growing resentment toward the crown and his assistance to Sons of Liberty missions, complicated by the discovery that Cassandra’s father is a titled Englishman. Does he dare trust her?

A fiery passion grows between them through gunfire, treachery, and danger, culminating in a kidnapping. Cassandra realizes her own spirit of independence, love of the land, and the savage man who is so much a part of it. Will he ever trust her enough to love her as she longed to be loved?

Lynette Willows is the co-author of “No Gentleman Is He”, the first in the historical romance Sons of Liberty series. Currently working on the second and third novel in the series, her former occupations included social work, freelance writer, columnist and copywriter. She divides her time between a patient husband and several finished and half-finished novels. She enjoys her husband retirement, camping and fishing with him, and she baits her own hook. She seeks adventure by chasing storms and occasionally sleeping in a teepee, because she likes her campfires indoors.

Both Carley and I are historical addicts, and this period of time particularly attracted us. So little in romance has been written during this time period, most focusing on the Civil War. We found this wild, exciting time in history provided so much more suspense and opportunity for historical research. Much of this book involves real people during this time, and the events so suspenseful we just couldn’t pass it up. We eventually found we had enough for three books, so “No Gentleman Is He” is only the first in the Sons of Liberty series. Book 2 and 3 are currently being written in tandem, which we hope to release soon.

Cassandra stopped short and gasped to find her employer gawking at her. In a futile attempt to hide more of her nudity, she tried pulling the towel more tightly about her. She stood helpless as his gaze traveled down her bare shoulders to her breasts, half exposed over the damp towel. Her legs were fully exposed to his appreciative view.
“You are not supposed to be here,” she blurted out, her blush spreading quickly across her face.
“I live here,” he reminded her in a husky voice.
“Yes.” Realizing how ludicrous it was to stand there and argue an obvious point, she politely added, “Excuse me,” as she fled upstairs.
His gaze followed her progress, enjoying the view from his advantageous angle of exposed, creamy, firm buttocks. His desire rose quickly, making his breeches tight. He decided it was best if he retreated to his room until he felt more in control.
Climbing the stairway, he turned into his room where a confused Cassandra stood in the middle of his bedchambers, looking around. She whirled to face him, a groan escaping her lips when she realized she was not going to escape another embarrassing situation.