You are here: Products Nikolai of Semar by Aurrora St. James 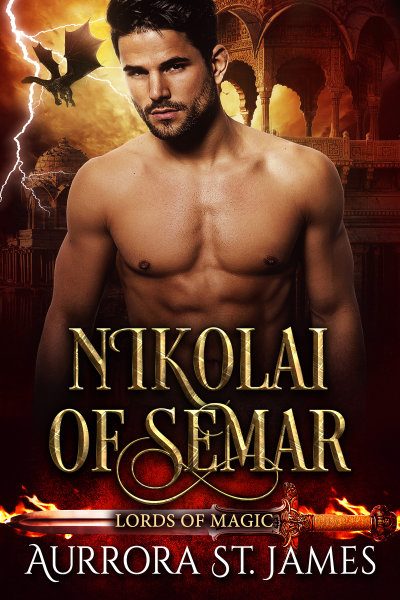 Dragon King Nikolai Baudin witnessed how love destroyed his own father after the death of his mother and vows to never take a wife. Yet, when the little girl he rescued so many years ago returns as a beautiful and mysterious woman, he finds the desires of his heart overwhelming his good intentions. But when some of his people are found dead, Nikolai must face the possibility that the woman who draws him may just be the one murdering those in his care.

Arianrhod Deatherage has every reason to hate the darkly handsome king who saved her from a burning pike, only to turn her over to strangers and then promptly forget about her. But when she finds him again, it’s not hate she’s feeling, but something far more unsettling… desire. If he discovers her secret, she could lose everything. But when people begin to die around her, Aria fears that the past is repeating itself, and that the man she’s come to admire could be the next victim.

Can two souls who have forsaken love join together to battle an ancient evil? Or will tragedies from the past separate them forever?

She has loved ghosts, graveyards, curses, gypsies, magic, vampires, and haunted houses for as long as she can remember. Not to mention archaeology, pirates, lost treasure, lost lands, and pretty much anything paranormal.

This book is the re-imagining of a tale I created many years ago while watching a favorite television program (which had absolutely nothing to do with a desert kingdom or dragon shape-shifters). But out of that TV show grew a small group of writers who took the show's characters and put them into an entirely new setting, and spun new tales.

During that particular time of my life, I was going through some personal issues, and rediscovered my love for writing. You could say that the TV show and the stories we wrote launched me into my writing career. I realized then that I wanted to be an author more than anything else and share my love of romance with people. I wanted people to read my stories and find hope for the future and their own relationships, and to realize that no matter where you are in life, you can overcome anything.

Four hundred years later, I've come back to Nikolai. It was such a pleasure to return to his character. He's as handsome and heroic to me now as he was then and, I don't mind telling you, I'm totally smitten with him! The kingdom of Semar is the same, as are some of the side characters, but the adventure is a little different. Niko's original name changed, but he's always had Arianrhod for his heroine, and their true love remains.

I'm SO excited to share this book with you. For me, it is a bit like coming full-circle, and yet also sharing something that has been dear to me for a long time. I hope you enjoy Nikolai!

Excerpt from Nikolai of Semar:

Nikolai kneels at the shore of the oasis just outside the gates of the city of Semar. His inner premonition – his Knowing – tells him that some, unknown danger is coming for his people.
—-
Niko knelt on the shore and trailed his fingers through the water, sending his magic into the heart of the spring, seeking the source of the disturbance.

“Planning to go for a swim before greeting your caravan guests? The market is set up,” Kiril said as he strolled up to stand next to Niko.

“I shall go tomorrow,” he replied.

Niko blew out a breath. Anytime his Second was silent, he was about to be lectured by the man. “There is something I must attend to today,” he said, hoping to stave off the rebuke.

Niko stood and glared down at his friend. “Which of us is king here?”

“The one who greets the caravan first,” Kiril said with a grin. He stroked his short beard. “Do you think I could pass for the King of Semar with the ladies?”

Niko shook his head. “The water of the oasis is low.”

Kiril shrugged. “More people are about. It is to be expected.”

“This is your sorry excuse for not doing your duty?”

“I’m concerned,” Niko ground out. “As your king, I should not have to explain myself to you.”

“As your Second, I shouldn’t have to remind you to do your duty and not worry over something as small as the water level of the oasis after a week of blazing hot summer days.” Kiril crossed his arms over his chest.

Niko stared him down. “I sense something is amiss.”

“There is. You’re distracted.”

Nikolai blew out a breath and reined in his frustration. Three years ago, he’d picked Kiril as his Second for his steadfast spirit and his loyalty to Semar. Those two traits irritated him now. The too-eager young man who’d joined his guard all those years ago had turned into a full-grown pain in his arse. “Half an hour.”

Niko wanted to wipe the cocky grin off the man’s face with his fist. “One hour.”

“You’re lucky I don’t have you slain for speaking to me so. If you weren’t my friend, I’d have kicked your arse by now.”

Kiril had the audacity to laugh. “It’s never stopped you before.”

Nikolai shook his head, unable to keep the grin from his lips. “Two hours, damn you, and not a moment more. Then you will leave me in peace for the rest of the day.”

Kiril clapped him on the shoulder. “Agreed. Two hours is enough time for me to find something to keep me occupied for the remainder of the day.”

More like someone, Niko thought. Despite Kiril’s irritating habit of always being right when it came to Semar, he deeply appreciated the man’s friendship and counsel. Especially since Niko’s twin brother, Stefan, had been gone for months. He wiped his hands on his pants and followed Kiril toward the caravan.

Together, they wandered through the many market tents. Most tents had brightly colored curtains with little tassels welcoming people into the cool interiors, though some were open to the air to better display their wares. Sheets of fabric in faded reds and greens stretched over their heads, keeping the harsh heat at bay, and a warm breeze blew, bringing the scents of cinnamon, paprika, and cardamom.

Niko breathed deep as he and Kiril pushed through the crowds. Despite his words to Kiril he loved the scents, the energy, and even the haggling of the bazaar.

“I love when the caravan comes,” Kiril said as they stopped at a weapons tent.

“Such luxuries cannot be acquired anywhere else.” Niko knew. Stefan and he had traveled extensively before at last settling in Semar.

He left Kiril admiring a set of throwing knives and crossed to the book seller. Leather-bound volumes lined her booth and it was some time before he noticed Kiril standing over his shoulder.

“Surely you can find something other than a moldy old book, Niko. You haven’t cracked a smile the entire time we’ve been here. I thought that our agreement implied that you would enjoy yourself, however I now see that I will have to be more explicit in my terms.”

Niko snorted. Women followed their progress even now, and more than one had beckoned him with a sultry flutter of eyelashes or the accidental brush of their sweet bodies against his. He adored all women, no matter their shape, size, or color. Yet none called to him. None enticed him to look a second time. The interest he’d lost with Helene seemed to apply to other women as well.

“Allow me to buy you a pint of ale. After which you will enjoy the remaining two hours of our shopping.”

“Yes, but you see, there is a one-hour penalty for not enjoying the first hour.”

Nikolai scowled at Kiril, but knew the man well enough to understand he wouldn’t win this particular argument. At heart, Niko knew that Kiril worried he took life too seriously. Perhaps he did. “Agreed. Ale and two hours of revelry.”

“You don’t have to sound as if I’ve just gouged out your eye.”

“That was the part I enjoyed,” Niko replied as he paid the seller for the book of fables.

Kiril laughed and they made their way to the ale tent, where many of his guard enjoyed a tankard and stories of lands far beyond Semar.

As they approached, a woman came out of a tent stacked with carpets. She held a red rug with bright cream and green flowers and lay it on top of the nearest stack, then disappeared back into the darkness of the tent. Wholly unremarkable, except that the moment she appeared peace flooded Niko’s soul. When she swept back into the darkness of the tent, the feeling sucked out of his body as if by force.

Niko gripped Kiril’s arm to stop him from entering the ale tent. “Did you feel that?”

“Did you see the woman?” Niko pressed.

Kiril looked around them. “Which one? There are many. Did someone catch your eye?”

Niko shoved the book of fables at his Second and strode to the carpet seller’s tent. The peace he felt was like a beautiful balm to his soul. It soothed him for the briefest instant. A taste that had him and his dragon begging for more.

He ducked past the green tasseled curtains into the cooler interior of the tent. Bright lanterns lit the space, revealing stacks and rolls of carpets of all shapes and sizes. Rugs hung on the walls, displaying the fine quality wool and exceptional craftsmanship. Nikolai’s brow furrowed when he didn’t see the woman. Had he imagined her? Impossible. He couldn’t have conjured up the feeling that stirred him to distraction. She was here, somewhere.

He spun, taking in every detail, until he spied the slim gap between two hanging carpets and the lit space behind it. He approached just as the woman stepped through, right into his arms.

Peace flooded Nikolai’s body as her slim hands landed on his chest. The tiny amount he’d felt outside was nothing compared to the wave he experienced when his hands landed on the soft skin of her arms. Tranquility sank deep into every fiber of his being, caressing him like a lover. Arousing. Breathtaking. Niko sighed in pleasure and pulled her closer to his body.

She gasped at the contact, her eyes widened, and suddenly it was Niko’s turn to be astonished. Thick silvery-gray lashes and delicate eyebrows framed eyes as gray as a dove in a heart-shaped face. She wore a scarf around her hair, but it slipped back enough to reveal locks as silver-gray as her brows. Yet the woman wasn’t old by any means. She didn’t have a single line of aging upon her face.

“Remarkable,” he breathed, tracing the delicate arch of her eyebrow. “Like moonlight.”

Deep in his mind, his dragon rumbled a sigh that sounded suspiciously like a purr. He’d never heard the noise before from his other half. Whoever this woman was, she affected them both on a level he’d never known.

Be the first to review “Nikolai of Semar by Aurrora St. James” Cancel reply