You are here: Products Night’s Caress by Mary Hughes 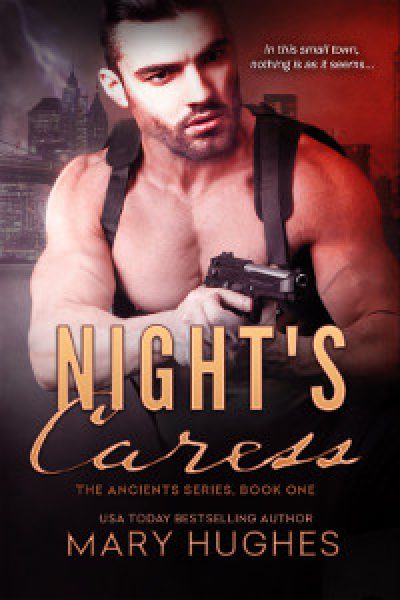 Brie Lark wants nothing to do with her hometown or vampires, but FBI Special Agent Seb Rikare needs her help on a case…in her hometown. And she’s pretty sure he’s a vampire. What’s the worst that can happen?

Brie is on the phone with her best friend Sera, heading for a quick New York lunch.

“I miss you, too, Sera. Why don’t you visit me here? We can take in a Broadway show, go dancing—Oh, crap.”

I’d been heading for a hot dog cart near the corner and had just spotted a man standing in line. He stood unmoved by the bobbing masses, literally head and shoulders above the crowd.

Only one man I knew that stunningly tall—Special Agent Seb Rikare.

Or rather, not man. I guessed Rikare was a vampire.

“It’s nothing. A ping on my asshole meter.” My last boyfriend had been a vampire. It had not ended well, like a marshmallow Peeps party held in a microwave. I’d vowed never to get involved with another fanged male.
Naturally, Fate, who was a snarky bastard, molded the very next guy I met into my idea of perfection—gleaming black hair, granite jaw, bedroom eyes, and muscles like bowling balls, plus a brain that catapulted him to top agent with the FBI.

I’d have tapped that in a second except for the likelihood that, along with his shield, Rikare carried the extra-large V-size condoms in his wallet.

I wasn’t absolutely sure about that. The vampire thing, not the condoms. Except for folklore and guesses, I didn’t know a lot about them. Until April, when Sera met and married her mate, I wasn’t even sure they were real. Even now, I only had superficial details. They were incredibly sexy. They couldn’t be out in the sun for long. They could hypnotize most anything, unless that thing was immune. They had fangs and bit humans.
Bites were orgasmic.

Yeah, my ex and I—we didn’t talk a lot, but I got that much from experience.

Seeing Rikare, towering over all the ordinary people, his unearthly beauty shining bright, sent a shaft of lust through me. Mr. Perfection was a temptation I could barely resist. I wanted to plaster myself to his impressive chest and offer my neck as craft brew on tap.

Traipsing down that path had led to tears. Traveling it a second time, expecting different results, was the very definition of insanity. So I’d been avoiding Rikare at all costs.

Under my breath, I muttered, “Damn it, I just want to grab a sandwich. I don’t want to deal with him now.”