You are here: Products Next to Never by A.L. Long 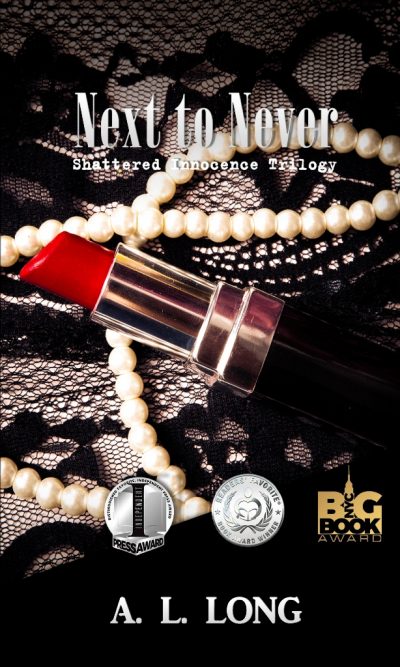 Next to Never by A.L. Long

Rade Matheson is a young successful businessman with over a billion dollars in assets. His only objective is to find the man who embezzled millions from one of his companies. What he finds is the innocence of the only woman who can lead him to his stolen money and the man responsible. The only problem is he can’t get enough of her. One wrong decision could cause him to lose her forever.

All Dylan Adams wanted was to get her life back on track. After the death of her fiancé she knew she needed to move on. She opens her heart to Rade Matheson only to find she’s falling for a man who betrays her trust. Will her endless desire haunt her forever or will her weakness take over?

I have always loved reading romance books and had always wanted to write one myself. It wasn't until I retired that I was able to find the time to do just that.

The passion ignited a feeling Dylan hadn’t felt in a long time. She submitted to Rade’s touch. Dylan slowly parted her lips to allow Rade to consume her. His kiss was so gentle. Slowly his tongue slipped between her lips and began exploring every inch of her beautiful mouth. He kissed her deeper as he felt her give in to him. He gently bit her bottom lip as he sucked and twisted his tongue with hers. Nothing compared to how good she felt. Keeping his lips to hers, he slowly lowered his hands to her waist. Unable to hold back, he lowered his hand to the hem of her skirt. Pushing up on the material of her skirt, he slid his hands up the outer side of her soft silky thighs. Dylan was beginning to feel the fire burning between her legs. Their desire became more intense. Rade could hear her little moans as he began to press his lips harder to hers.

Rade slowly slid his hand to the inside of Dylan’s lace panties when she softly said, “Rade, please.” Rade continued with his tender exploration of her sex. He needed to have her. He could feel her wetness. He wanted to feel the heat that was waiting for him. Dylan lowered her hand to his trying to remove his hand from under her panties. Rade let Dylan take charge, allowing her to reposition his hand back on her waist. Wanting more, Rade deepened his kiss once more. When Rade felt her surrender to his touch, he gently lifted her and pressed her body against the wall, being careful not to disturb the pictures that hung inches away. He pulled her legs around his waist, careful not to hurt her in his attempt to get her closer to him. He began grinding against her. Dylan could feel the hardness of his erection beneath his jeans. At that moment, his need for her increased even more. Dylan squeezed her eyes shut, trying not to cry. All she could think about was Michael. I can’t do this. Michael, where are you? She wanted Rade’s touch so much, but she knew she had to stop. She couldn’t continue, knowing there could be a chance Michael was still alive. “Rade, please,” she whimpered softly. “Rade, I can’t do this,” she pleaded. “Rade, please STOP!” Dylan was pushing against him trying to get him to release her. Tears were flowing steadily down her cheeks. Rade slowly lowered her to her feet and looked at her with confusion. “What is it, Dylan? Did I hurt you?”

Dylan pushed Rade out of the way and grabbed her purse, which had fallen to the floor sometime during their embrace. She began running away from Rade when she heard him. “Dylan, stop! What did I do?” Dylan ignored his words and kept running to the elevator. Before Rade could get to Dylan, the elevator door opened. She hit the button to the ground floor. The doors shut before Rade could stop it. He couldn’t wait until the elevator came back up to go after her. Instead of waiting, he entered his penthouse and went through the door just off his kitchen and descended down two floors to catch one of the other community elevators.

Be the first to review “Next to Never by A.L. Long” Cancel reply