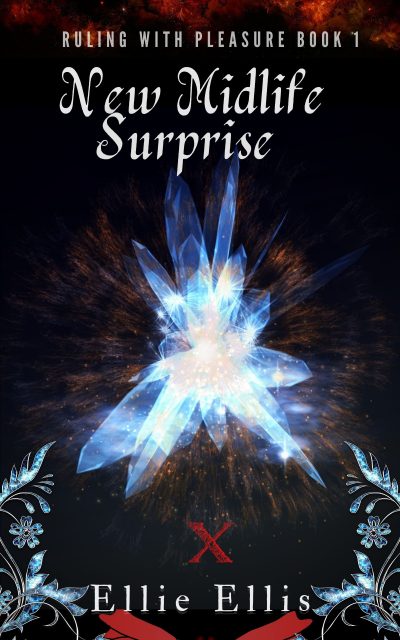 Paranormal Women’s Fiction. Get ready for a roller coaster of emotions…

Ella Turner (nee Yates) is going through a divorce in her forties that sees her without a home. Thankfully, her brother is allowing her to housesit his cabin in the woods, away from the prying eyes of drama and those who once knew her.

But before she has a chance to settle into her new life in a small quiet town, her world is turned completely upside down when she lays eyes on a hot pizza delivery guy.

Ella has to make the decision of her life: will she choose to stay in the small town and find her own path in life, or will she let Fate drag her into a world where nothing is considered normal anymore?

Ellie Ellis is an incurable erotica writer, she writes hot erotica sex stories and open-minded too. She loves other authors, erotica Sci-Fi horror books obsessed with the idea of love fascinated with sex and captivated with the art of writing she wrote widely about sex dating books and romance. Ellie Ellis writes emotionally intense young adult and new adult fiction across a number of different genres with swoon-worthy Romance Complex characters and tons of unexpected plot twists and turns that will have you sleeping the pages beyond bedtime. She had completed her degree in creative writing.

I broke down on the steps of the courthouse, bawling my eyes out. I should be happy with the finalization of my divorce. I should be glad that I’m luckily out of that cheater’s life so that my heart would be safe from his philandering ways.
Instead, I found myself mourning the loss of the life I once had. Almost in my 40s, it slowly dawned on me that I’d just wasted twenty years of my life with a man who’d grown out of love with me. A man who only cared about the next hot piece of ass he could get his hands on so that he could impress his friends. I had just been a tool to him, he’d admitted to my face when I’d first flung the divorce papers at him to sign. A tool that he’d only kept around to boost his ego. I’ve outlived my usefulness to him, at-first-sight. I have a few more grey hair than I used to and earned a few wrinkles on my face. My ex-husband Justin Turner no longer has any use for me.
At least, that’s what he wanted me to believe with all the horrible things he’d said in that courtroom. One would think that the judge would have taken his words into consideration when settling the matter, but my emotions weren’t being taken into account. Just the facts. And the facts were that our house was in Justin’s name alone (despite having told me that both of our names were on it). Which meant I was out of a home and had nowhere to go.
That was a month ago. The tears were shed, I’d jumped around from one apartment to another owned by friends until I out of the blue got a call from my brother to house-sit one of his cabins in the woods. It’s his summer home for when his kids are no longer in school, a trip away from the city so that they can get closer to nature and escape the responsibilities of modern technology. I scoffed at first at the idea, but the longer I thought about it, the more I was drawn to the idea of being on my own for a change. It had been so long since I’d ever had any quiet time to myself that I wasn’t sure what I wanted anymore.
But being at this cabin would definitely help.
“You’ll have everything you need,” my brother huffs as he helps me pull the bags out of the trunk of the car. “There’s a generator in the back if you lose power – I’ll show you how to work that – and the nearest grocery store’s about a fifteen-minute drive towards town. What did you pack in here, bricks?”
“Uh… it’s shoes,” I reply, my face flushing red with embarrassment. I know there’s no need for expensive high heel shoes up here, but I have nowhere else to keep them nor any money to pay for storage.
My brother rolling his eyes tells me he’s thinking the same way.
“It’s just for this summer until I can get back on my feet again. I promise.” I pile a few boxes together and lift them out of the trunk. “I’ll be sending resumes every single day until I land something.”
“Ella, you know you can take a job at my company. I’ve told you that…