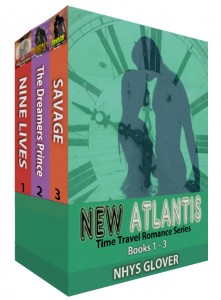 Experience the pleasure of the first three full-length novels in the New Atlantis series in one ebook. Over 165,000 words to enjoy as you explore the Utopian world of New Atlantis in the year 2330 and meet the time travelling Retrievers whose task it is to repopulate the decimated planet with people from the past.

Meet Cara, the 45 year old teacher from 2011 New York, who is offered a new love and a new life in this fabulous future world. But will she stop rocking the boat long enough to keep what she’s gained? Meet Jac, her gorgeous Retriever, who finds love for the first time in hundreds of years, but discovers he may lose it if he’s not willing to change himself and his whole world in order to keep her.

Then journey back to Sydney Australia in 1968 and meet Jane, the plain little shop assistant who jumps off a ferry to save a boy’s life and wakes up in a beautiful new body in the future. But does Julio, the bad boy Brazilian she idolizes, love her or just the body she now inhabits?

And finally, join Faith as she engineers an audacious mission to 1942 to rescue 150 children from a train heading for Belzac Death Camp in Poland. When things don’t go as planned, she find she must Retrieve Luke, a US commando, who saves her from the Nazis. But this savage warrior has no place in her peaceful world, and even love and a whole new life in the future won’t keep him from doing his duty and completing his mission.

For women who like their love scenes steamy yet wholly romantic

Link to this site.

I was inspired to write the New Atlantis series by the desire to escape my rather boring life. I’ve tended to live a less than boring existence up until the last few years, so I found I got bored when nothing was happening. So I thought, what would my perfect life look like? And so I started creating that life in my imagination. In that life the world was a peaceful utopia where life extended indefinitely by using cloned bodies, and you could do anything you wanted, even time travel. And of course, that perfect life would have to have romance, so I started creating gorgeous, somewhat flawed men to populate it. Bit by bit, that world became real to me, and even though I thought I’d finished the series, I find I’m back there again, because I love New Atlantis and the people in it so much I just can’t stay away. My readers tell me they have the same kind of response to it.

Jane froze. If the toilet was in the mirrored bathroom, she would see her new self. Was she ready for that? In her mind, she saw herself looking like a red head she’d gone to school with. That girl had been so ugly she made Jane look pretty in comparison. Just because this Karl had chosen the prettiest of his ‘spares’ didn’t mean she was actually pretty. How devastated would she be to find herself with a face no better than her old one. At least the body was slim and feminine. And she liked being tall. How bad could it be?
‘I guess now is as good as any, to see what I’m stuck with for eternity. Let’s get it over with.’ She tried to lever herself out of the deep cushioned seat of the sofa, but it took Julio coming quickly to her side to pull her up, before she was able to stand on her own. Or on her clone’s own two feet.
Jane looked closely at him from beneath her eyelashes. His face was closed. She wished she understood what was going on for him. They had seemed so close when he held her on his lap and fed her. Now he was an aloof stranger again.
He kept his arm around her, as she followed Maggie down the hall to the bathroom. The toilet, it appeared, had its own separate room. The woman stepped out of the way and let Julio walk her into the mirror-filled bathroom. It was quite unlike anything she’d ever seen. But before she got too caught up with 24th Century plumbing, she had to look at the figure in the white tunic held at Julio’s side.
‘She’s a… princess!’ she gasped, as she took in the glorious sight before her. Porcelain skin unmarred by freckles, delicately balanced features, full plump lips, and huge green eyes flecked with gold. And instead of the copper lashes and brows she had dreaded, what she saw were dark auburn, like Maggie’s hair. Those incredible eyes were doe shaped, tilting up at the side. Her high cheekbones were flushed pink. The princess was as embarrassed by the close scrutiny as she was.
‘Do you think you can be happy with this body, Jane?’ Julio asked gruffly, drawing the thick curtain of copper hair over each shoulder so she could see how far down her body it went.
‘I… she… looks like a catwalk model. Like Twiggy!’
‘Good God, you look better than that! More Bo Derek or Michelle Pfeiffer!’ Maggie exclaimed, from the doorway.
‘Who?’
‘Don’t worry about it, Jane. Two beautiful actresses of the 80s, I think. I am still waiting to hear you tell me whether you can be happy seeing her in the mirror every day.’
Jane didn’t know what to say. Being beautiful had been her dream all her life. Now that she was, she felt like a fraud. This wasn’t her. The real her was Plain Jane. How could she possibly be herself ever again? As she looked at the beautiful princess standing next to her darkly handsome prince, she felt as if she had lost something. Julio would never fall in love with the real Jane. He might fall in love with this stranger, but that wouldn’t be her. She had lost him, even though she had never really had him.
‘I’m very lucky.’ She wondered if her reply sounded as if she was thanking someone for an unwanted Christmas present. It was how she felt.
Julio spun her around so she was facing him. His look was intense, his dark brown eyes sparking. ‘Listen to me, Jane, you are this clone now. I see you looking out of her eyes. This isn’t a mask or a disguise you’re wearing. This is you. The expressions are yours, the gestures. I’ve watched you for over a week, probably more than you were aware I was watching you. What makes you Jane, is here. I see it. Do you understand what I’m saying?’
Jane felt her eyes filling with tears. Yet again, he was doing just what she needed. Somehow he understood what she was thinking and feeling. Her heart opened a little more to him.
‘No more tears, Querida. I said no more tears…’ His hands were on either side of her face, holding it as if it were as fragile as glass. Now she knew that was exactly what he was holding – a beautiful face – ethereal and fragile. She, Jane, the real Jane, wouldn’t have been treated with such care.
His thumbs were stroking away the tears again. And his eyes warned her what he was about to do. His mouth came down to touch hers, a butterfly kiss. Yearning for more, she moved toward him and opened her lips. It was enough. His arms came around her, and pressed her into him, his mouth covering hers, tasting her, savouring the connection.
She wanted to close her eyes, to focus all her attention on the feeling of it. But she wanted to watch him too. This beautiful man was kissing her, and she wanted to see him, up close as he did. In the end, she just let go and closed her eyes, drinking in the blissful feelings, as her heart pounded loudly in her ears.
Finally, Julio drew her away from him. His hands were shaking, and he looked distraught. ‘It might be better… There is plenty of time…’ He backed out of the room. A moment later she heard him talking softly to Maggie somewhere down the hall.
What had she done?