You are here: Products Never Let Me Go by Jennifer Haymore 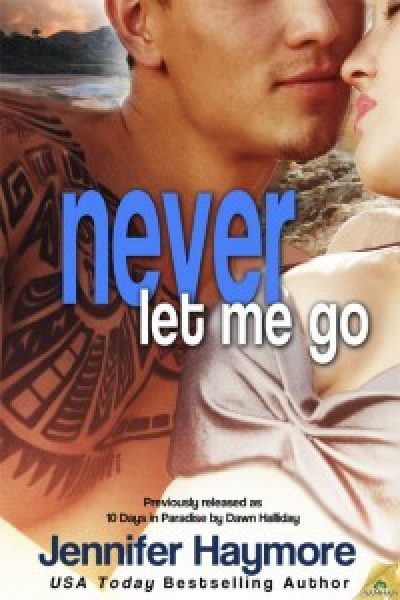 When Celeste McMillan graduated from college, she hit the ground running, prepared to overcome every challenge and climb the corporate ladder at record-breaking speed. But then a client assaults her, and her boss forces her to take a ten-day “vacation” in Hawaii.

Kanoe Anakalea is intrigued when he meets the pale-skinned, redheaded haole on his favorite surfing beach. Celeste is intelligent and adventurous, sexy and sweet. Even though sun, sand and sexy surfers are as foreign to Celeste as the L.A. corporate world is to Kanoe, their sexual chemistry sizzles.

As they spend sun-warmed days and plumeria-scented nights in each other’s arms, they find themselves falling hard. Yet love is out of the question. Kanoe is rooted in his island home, and Celeste’s future beckons in L.A. As the clock ticks down, Celeste realizes that letting go might be the greatest challenge she’s ever had to face.

You can find Jennifer in Southern California trying to talk her husband into yet another trip to England, helping her three children with homework while brainstorming a new five-minute dinner menu, or crouched in a corner of the local bookstore writing her next novel.

Love of my home state and the Big Island of Hawaii, where I grew up.

She said softly, “I bet you’re a good surfer.”
He grinned at her… Wow, that grin was going to be the death of her if she wasn’t careful. “I am. Very good at it. And I like it too. A lot.”
On the water, a surfer had caught a wave and was making wide turns as if he were on a slalom course. Finally, he flipped his board up over the crest of the wave. The board, and the surfer, went flying into the air. The guy had clearly done it on purpose.
“It looks fun,” she said.
“It is fun. Have you ever surfed before?”
“I haven’t, but maybe I’ll try it sometime.” Her tone was flirtatious, even though she hadn’t intended it to be, and she felt another blush prickle her cheeks.
He smirked as if he could read exactly how attracted to him she was. “Maybe you should.”
There was an edge of a challenge in his voice, and he’d also lowered it to a tone that made a sweet shiver run up her spine. She wasn’t sure if he’d intended it to be so seductive, but she was definitely seduced.
Suddenly she had an insane urge to run her fingers over his tattoo, trace those strong, dark lines with her fingers, feel the hard muscles beneath the exotic design… Every nerve in her body seemed to stand on end in anticipation.
She shook herself. He was a stranger. She really didn’t know anything about this guy.
It must be all the humidity, because she never got hot and bothered like this. Anyway, she was not the vacation-fling kind of girl. She wasn’t an any-sort-of-fling kind of girl.
Again, she felt that crazy urge to touch him. This time she couldn’t control it. Just a little touch—that was all she needed.
She inched her hand toward where his was clasped over the railing. As soon as her skin made contact with his, she stopped. Simple contact, a basic connection, but it felt right. She wanted more.
Trying to inhale some sanity, she drew in a deep, long breath. He still gazed out over the water, his expression perfectly blank, giving no hint as to what he was feeling, whether he was having this same electric reaction to her as she was to him.
Maybe he was…
Probably not.
“Thanks again for your help,” she said softly. “I don’t know how I would have gotten in the house without you.”
He looked down at her, and when their gazes locked, her heart slammed against her chest double time. Long black lashes framed his gorgeous golden-brown eyes. One corner of his lips quirked into a smile, showing that dimple again, and Celeste melted.
“You’re welcome.”
His voice licked heat under her skin. She didn’t want him to go, but there were so many things wrong with wanting him to stay, she couldn’t even begin to tick them off in her mind.
In any case, she needed to unpack, clean up. Check her email, send some emails, review the Goderich file to see if they’d missed anything in the analysis. Take a nap, though she suddenly didn’t feel tired, despite her general lack of sleep for the past thirty-six hours.
“I’ll see you around, maybe?” Her voice was low, huskier than usual. Still, it was a clear hint for him to go, and a part of her regretted it as the words escaped her mouth.
He tilted his head at her. “Maybe.”
She led him to the front of the house, thanked him again and watched him stride to the top of the cliff. She tried not to stare at his butt, but the flexing muscles as he walked up the hill had everything inside her standing up and paying attention.
At the top, he took his bright yellow surfboard from where it leaned on her rental car, then turned away and walked up the road toward the line of cars parked along the guardrail at the cliff’s edge. The rain started coming down hard, and he disappeared into it like an apparition.
She released a heavy sigh. He was gone. That was probably a good thing.
But a part of her wanted him to come back.