You are here: Products Naughty Notions by Naughtie Scribe 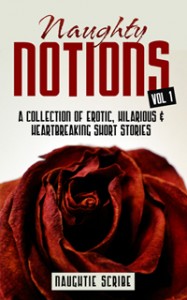 Get Naughty & Satisfy Your Guilty Pleasures…

Lose yourself in a world filled with damaged children, ghostly guardians, and fanged lovers. Confront the wayward inhabitants that challenge the limits of human resolve. Submit to the will of an irate Master. Discover forbidden pleasures and grungy blessings:

Addiction vs. Redemption – Pick a side.

Give in to the decadence of these thirteen short tales, explore the naughtiness buried within.

Get Naughty! Grab your copy today.

My style of writing reflects my life; open, unabashed, and willing to take risks. I don’t shy away from uncomfortable subjects, and I revel in the naughtier pleasures of writing. It is my personal flavor of the written word and lust for creative expression that I wish to share with a like minded blogosphere and readership.