You are here: Products Naughty Neighbors by Destiny Blaine 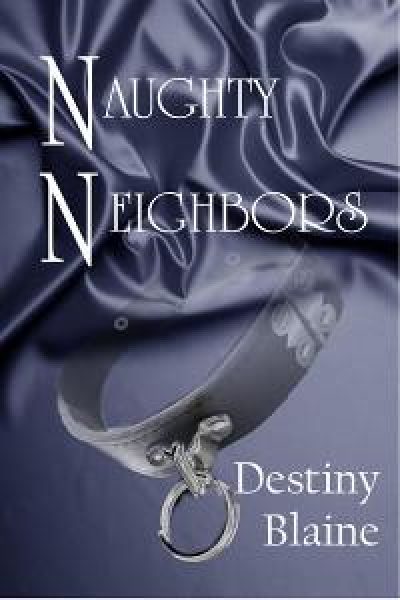 After her football superstar boyfriend is caught in a compromising position, Kara Ball has had enough. Tired of waiting on the sidelines, she decides the role of jilted lover doesn’t work for her. Kara springs into action and pursues her sexy neighbor, an irresistible Dom who is twenty-seven years her senior and the object of her most recent fantasies.

Zak Stone stops by Kara’s condominium to drop off a parcel, but after the sultry seductress learns of her boyfriend’s sudden engagement to another woman, plans change. As Kara opens up the package filled with illicit toys, the naughty ideas start churning. She invites Zak to stay overnight, hoping an evening of passion will keep him coming back for more. Fortunately for Kara, Zak has plans of his own for the sensual submissive.

It was a combination of things that drove me to write Naughty Neighbors. My love of football certainly played a role in the decision but a lot of ‘what ifs’ weighed in, too. For instance, what if two busy friends willingly shared their boyfriend? What if the concept worked so well they took things for granted, like how to handle the rumor mill, particularly when it spins with all sorts of misguided information, like a pending engagement and surfacing pictures to support the news? Naughty Neighbors isn’t for the faint at heart. With BDSM incorporated, this sports romance leaves little to the imagination.

Excerpt:
“Are you in the business of fooling around with younger women?” she asked, working a strut like he’d never seen before. Leaning over to pick up the handcuffs she’d deliberately—and obviously—dropped, she wiggled her behind.
He swore under his breath, wishing he could set aside his morals for one night and take her in his arms and hold her there until he taught her a few things about Domination and submission. He’d show her why a Dominant man needed a submissive woman. He’d teach her how to willingly submit and make her understand that through her submission, she would know empowerment. She would experience a new level of intimacy.
“I’ve only been with Kemper,” she told him, acting as if her revelation was the best news he’d received in over a decade.
In fact, he would’ve preferred it then if she’d confessed to promiscuous behavior.
“You’re hurting,” he reminded her, reading entirely too much into her confession. “I’m here and you have a wounded heart, a torn soul. I can’t heal you, Kara.”
How did he tell her he didn’t want to heal her? How did he explain that while he wanted to kiss it and make it better, curing her wasn’t on his mind? He wanted to claim her, and if he claimed her, he fully intended to keep her.
How did a man tell a woman that?
She took a step toward him. He took one step back. She shot him this funny little look, crossed her arms, and for a minute, he could’ve sworn she was about to strip her shirt over her head.
He willed her to stop even though his body already had reached a decision, drawn all conclusions.
One touch and she was his. One gesture to indicate she fully intended to invite him to stay and he would give in to the long awaited temptation, the attraction he could not deny.
She moved toward him again, taking three short calculated steps as if she had deliberately analyzed the best way to separate their distance just as she’d done earlier when they’d been downstairs on her sofa.
“I can’t take his place, Kara. I can’t make the hurt go away.”
“You can try.”