You are here: Products Naughty in Nature: A Collection of Outdoor Erotica by Roxanne Rhoads 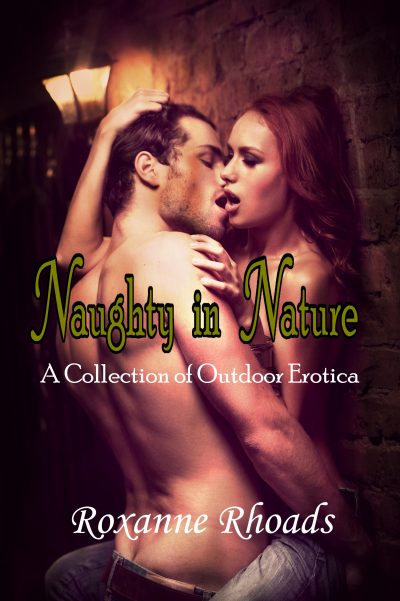 Naughty in Nature: A Collection of Outdoor Erotica by Roxanne Rhoads

Restless in the Storm

Angie feels the heat in a very unique way and when it storms her ache for release is even worse. Now a thunderstorm is coming and Angie’s husband isn’t home to help her through it. She’s going wild trying to wait for him – he almost doesn’t make it in time. Thankfully he arrives home just before the rain starts pouring from the sky and that’s when the sparks really start to fly.

Tom is scouting a forest area for his land-developer boss when he encounters a beautiful woman naked in the forest performing some kind of ritual. He is intrigued and highly aroused so he hides in the shadows watching her with complete fascination. Ardwinna, the Earth witch and protector of the land, knows Tom is watching and takes extra delight in his arousal as she performs her spring fertility ritual that includes bringing herself to climax, while he watches. When she invites him to join her, he gladly accepts her offer.

Something More Than Friends

A clandestine hookup in the front seat of a car is anything but casual as two friends simmer with emotion while hiding their secret affair from the rest of the world.

The heat brings out carnal urges in Gina, urges she can’t control as the hot summer sun beats down upon her bare skin. You won’t believe the naughty things she does to appease her needs…while her neighbor, Joe, secretly watches.

Serena’s loneliness and the relentless summer heat have her aching for something sinful. Her wishes are granted when Rob, a sexy lawn service technician, shows up to get her yard in shape for the annual 4th of July party.

A Hot and Sticky Summer Night

It’s a hot summer night and a young couple is plagued by boredom. They drive around looking for something fun to do. They end up making love in the woods… and it’s anything but boring.

Not Another One Night Stand

Rebecca has been watching Damon at the nightclub for weeks. One night she finally works up the courage to approach him…and he goes home with her. Will it be just a one night stand or could it be something more?

Roxanne Rhoads is an author, book publicist, mixed media crafter, and lover of all things spooky.

Roxanne is the owner of Bewitching Book Tours, a virtual book tour and social media marketing company, she operates Fang-tastic Books, a book blog dedicated to paranormal and urban fantasy books, and she runs the blog, A Bewitching Guide to All Things Halloween, which is dedicated to everything Halloween related. Roxanne’s sells handcrafted jewelry, art and home decor through Bewitching Creations.

When not reading or writing, Roxanne loves to craft, plan Halloween adventures, and search for unique vintage finds.

I love writing and sometimes the stories just flow out when I sit down to write.

Be the first to review “Naughty in Nature: A Collection of Outdoor Erotica by Roxanne Rhoads” Cancel reply