You are here: Products NAUGHTY hotwife on vacation by Jae John-Rose 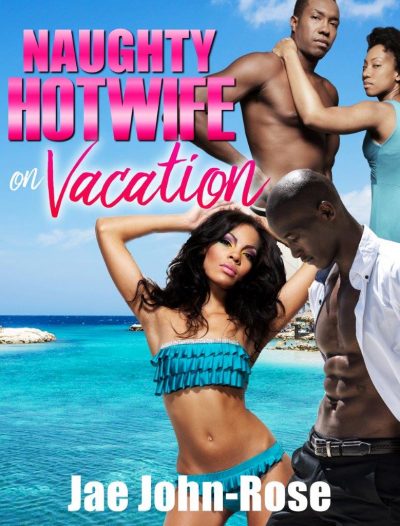 Daniel and Samantha are vacationing in Honduras in an attempt to spice up their once bustling sex life. Tiger and Marc are on the Island looking for new couples to introduce their lifestyle to. They set their eyes on Daniel and Samantha. Will they give in and put the spice back in their life, or will they remain in their dormant sex life?

This short and steamy number will have you moaning for more.

I was born in St.Thomas U.S Virgin Island but grew up in the beautiful Island Paradise call Dominica. Currently I reside in Atlanta, GA. I've got a huge family that I love very much because no matter what we go through, there is always love when we're together. I enjoyed spending time with my grandparents because they told the best stories. Now that they are no longer with us, I find myself telling their stories and mine. My family and friends think I'm funny but I'm just a boring person living a boring life with a good sense of humor. I have a son I love more than life itself and although I enjoy spending time with my folks, my me time moments are what I cherish the most. I'm a very private and reserved young woman.

The Boat Ride from the mainland had been quick. A few locals were on the boat with Daniel and Samantha along with one other couple who were probably also headed for the resort. Daniel and Samantha were tired from their long flight from Chicago to Roatan, Honduras. They had not spoken for most of the boat ride, but when the resort came into view they couldn’t help but exchange glances. The green trees emerged out of the ground like they were trying to take over. The palm trees were like bizarre windmills, the blades of which were living and wild.
We can jump right into the Caribbean from our front door, Daniel said and smiled.
Samantha breathed in the salty air and exhaled. She put her arm around his thin waist and he put his arm around her shoulders. With their arrival they felt unburdened. All the months of preparation and weeks of worrying that something would go wrong seemed so inconsequential with the South American sun in their eyes and a light spray of water from the Caribbean Sea in their faces.
The other couple on the boat had their hands all over each other. They were laughing and snorting, shushing each other. Samantha looked over at them and decided that they were probably drunk. She shook her head and pulled away from her husband.
Do we look like them? she asked him.
Who cares? he asked and wrapped her up in his arms again.
When the boat pulled up to the resort, Daniel bounded down the stairs with almost all the luggage, leaving Samantha with nothing but her carry-on bag with her books and cell phone charger. She watched him as he carried the bags, refusing to let the resort employees help him as he made his way to the head office with a backpack and four bags heaped on his back. He was trim, but his muscles pressed against his skin. He wore a shirt that was unbuttoned and when he turned around to see how far behind she was his Ab muscles poked out like cracked rocks. He would smile that perfect smile of his and laugh and throw her down on the bed.
Samantha started remembering when they first got married. As a young couple, they once had a lot of sex. Their sex wasn’t even confined to their home and as Samantha followed him to the head office she thought of all the wild times they had before the distance had developed between them. She thought about the time they had been driving home from that weekend at his Parent’s and he had brought her to orgasm while he was doing 75mph down 290, or the time at that party on the pool table.
They had been invited to a party by a mutual friend who they both found pompous. Neither of them wanted to go, but they both felt a sense of obligation, so they went. They arrived on time, given their phony exchange of kisses and hugs to the hosts then found the bar. The couple poured each other drinks and retreated to the basement where there was a game room with darts, foosball and a pool table. Almost no one else was down there and soon the pompous and loquacious host announced that he wanted to give a toast. Daniel and Samantha had been unified in their contempt for such toasts, so they remained in the basement. When they realized no one else was coming back down, they started kissing and soon Daniel had lifted her up onto the pool table and had stuffed her panties into his jacket pocket. He yanked her skirt up her legs and she unzipped his pants. They laughed while they tried to keep from making too much noise and attracting attention, but the footsteps they would hear, coming down the stairs, or shifting directly above them only heightened the feeling of danger and the excitement of potentially getting caught. When he brought her to orgasm, they could sense the rest of the party getting quiet and perhaps a little embarrassed. They hustled out of the party soon after and laughed all the way home.
But that seemed like a long time ago. They had not been connecting lately. Their jobs were getting in the way. She had been doing the thankless tasks junior partners at law firms do so that they can make partner and he was picking up more work than either of them thought he would when he started his one-man web design business.
What she didn’t know as she followed behind him and watched his strong body carry all the bags was that he was thinking about the time they were at a Cubs game and they had sex in their seat while she sat on his lap and bounced up and down every time the Cubs got a hit. The Cubs beat the Mets 10 – 2 that day and they both went home exhausted. He too was hoping the resort could revive their once bustling, but recently dormant sex life.
When they got to their room they were surprised by how big it seemed. It was clean and neat, if somewhat Spartan. Daniel had relented once they checked in and allowed the bell boy to help him carry the bags.
The view from inside the room was spectacular. They could see the ocean stretch out for what seemed like forever and the lagoon was right outside their window. They could see several other bungalows organized not too far from their own, all of them little wooden tree houses, propped up on stilts over the water.
It’s good? the bell boy asked when they saw the room.
Very good, Daniel said and placed a tip in his hand. We won’t be in here very much anyway.