You are here: Products My Pace or Yours? by Maggie Maloney 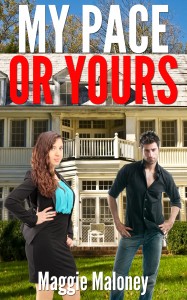 My Pace or Yours? by Maggie Maloney

What happens when an over-the-top, flat-out, chronically rushed career woman hires the world’s slowest carpenter to complete her late father’s half-built B&B before she loses it to the mob?

Type-A workaholic Beth Turner sure has her hands full: An eighty-hours-a-week real estate career … “The Yesteryear,” an unfinished inn left to her by her dad … a loan-shark waiting to snatch away the extremely valuable property if Beth misses the almost impossible completion deadline … and now: Sean Campbell.

Brilliant. Charming. A carpenter of legendary renown, Sean Campbell has no trouble convincing Beth that he’s the man for the job … except for the irritating fact that he is quite possibly the slowest-moving human on the face of the earth. Now add in some sultry summer heat, lust, and romance to mess things up and slow things down. Top it all off with a string of sabotage, courtesy of the murderous loan-shark, for which Beth blames Sean, and there goes the romance. And, barring miracles, there goes The Yesteryear.

But Sean is full of miraculous surprises, including his desperate transformation into a warp-speed building machine. But can even miracles overcome the loan-shark’s final piece of sabotage … one designed to put Beth out of his misery permanently?

Sean, in a construction-related argument with Beth.

Sean, in bed with Beth.

Maggie Maloney is a hopeless romantic whose love of writing propelled her to pen her first novel “My Pace or Yours?”, quickly followed by “Perhaps Some Other Time”, all while working as a professional musician, her other passion. As a gifted jazz composer and guitarist, Maggie learned the art of combining talent with finely honed skill and was able to translate that to her writing. Her fascination with the beauty of human connection brings her characters to life in a way that makes you care about them and get lost in their stories. Maggie lives in a cozy seaside cottage with her wonderful husband who she calls “My own personal Prince Charming” and her beloved four-legged pooch, Matches. Keep an eye out for more Maggie Maloney stories coming your way soon!

My Dad was a master carpenter just like Sean. Took his sweet time with all that he did. I loved that about him and VERY quickly came up with the story line. And, like Sean, he built only masterpieces. (Dare I say like the daughter he made?)

Be the first to review “My Pace or Yours? by Maggie Maloney” Cancel reply