You are here: Products My Knightly Dreams by Brittany Jo James 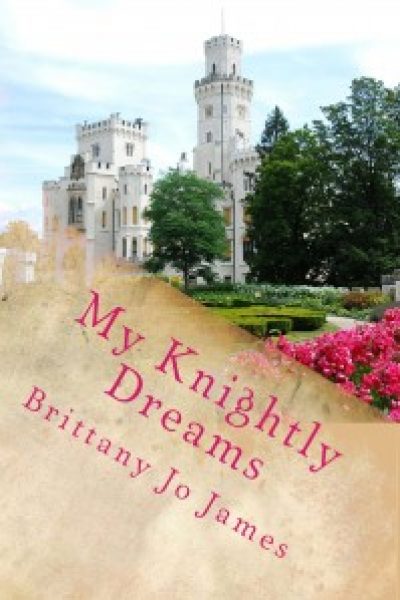 Now eligible for courtship, many men hope to be the lucky groom selected to marry the Duke and Duchess of Crawley’s beautiful daughter, Farren Montbassen. Farren only considers one man acceptable- a notorious knight enjoying a carefree life with little interest in the prospect of marriage. Sir Patton Caswell cannot help but be intrigued by the beauty and grace of the spirited young woman. Everything seems to be falling into place until a rejected suitor and his father decide to take matters of Farren’s marriage into their own hands.

The forthcoming Marquess of Farnborough, Bayard Norshire, plans to scare Farren into marriage by giving her an ultimatum- marriage, or the death of her family. By kidnapping the Duke and Duchess of Crawley, Bayard thinks he holds their young daughter’s future in his hands. Sent to the rescue by King Edward III, Patton takes Farren on a journey of a lifetime to save the Duke and Duchess before Farren is forced into marriage with the despicable young Marquess.

Brittany Jo James was born and raised in the small town of Idabel, Oklahoma. She is happily married to her high school sweetheart, Conlee, who is now a soldier in the United States Air Force. They share two rowdy sons, Jagger and Jett. Her life revolves around living for God, caring for her family and writing, writing, writing. The James family is currently residing near Anchorage, Alaska until the USAF decides otherwise.

My Knightly Dreams is my first novel. I knew I wanted to try to write a manuscript and I wanted it to be excellent, so I didn’t really trust myself to let inspiration hit me for a plot. I honestly sat down and started thinking of good story lines. Several outlines later, I came up with the plot for My Knightly Dreams. With my next novels, inspiration hit me for a story and I went with it. This one, however, was just much more controlled.

Once again, Patton did not know whether to feel relieved or worried, “And, pray tell, who was your first favorite man at the ball?” he teased with a devilish grin.
This time Farren was in no mood to start an argument, although she did not want him to know how deeply her feelings went. Two can play at this game, she thought. “Well he was tall… dark haired… a handsome devil, that’s for sure,” she teased.
“He sounds like a catch. I know I could not compete with someone like that,” Patton played along.
“Oh no, you surely could not. He was a knight, so charming and romantic. Believe me, no one could have competed with him,” she giggled.
“Well are you going to marry the gentleman?” Patton asked in a suddenly serious voice.
“Well, you see, if he asked me I would. But that will not happen, I’m sure. He is a man who couldn’t be tied down by a woman like me,” Farren replied in the same tone.
“Try me,” Patton whispered, leaning towards her. Suddenly he could not help himself for one more moment; all he wanted was to be closer to her. All the hurt and angry feelings he had suffered from for the past several months were erased and all he could think about was a future with this woman. Her scent was intoxicating; her eyes made him feel as if he were in a trance. He had never seen someone so breathtakingly beautiful in all his travels around Europe.
Farren locked eyes with him and for a moment she thought he was going to kiss her. Nervously she looked away, breaking the spell they had on each other. “Sir Caswell,” she sighed “I do not have the strength for heartbreak right now.”