You are here: Products My Dirty Vacation by Grace Risata 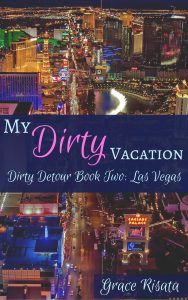 My Dirty Vacation by Grace Risata

“When you think of Las Vegas, what comes to mind? Most likely it’s fine dining, extravagant shows, and lots of gambling. Not in my world. Not when you’re surrounded by alpha males with a penchant for violence who ignore your meticulously crafted itinerary and expect you to ‘go with the flow.’ Why does nothing EVER turn out like I plan?”

My professional biography is as follows (I’m not sure why it’s in the third person, evidently that’s the rule): Grace Risata is very excited to share her novels with the world, and she hopes you enjoyed reading them as much as she enjoyed writing them. Grace would like to thank everyone for giving her books a chance and she welcomes all feedback. Grace is happiest when reading, eating Portillos hot dogs, and patiently waiting for the inevitable zombie apocalypse.

I went on vacation to Las Vegas and I thought, “Hey…this would make a great story!”

This was turning out to be a very amusing night at work. I pretended to be doing paperwork at the front desk of Grim Rock Distillery, but in reality I was eavesdropping on the guys in Rocky’s office.
It’s not like they were having a top-secret meeting or anything. Rocky, Sergio, and Dmitry were doing a few rounds of taste testing for the latest batch of Olde Devil Ginger Ale. I was not invited because I had a habit of complaining about every sample that I tested. It’s not my fault none of them were right. I couldn’t in good conscience let Rocky mass produce something that I didn’t stand behind. I cared about him too much to lie and tell him that his recipe was perfect if it tasted like crap. This is what got me banned from the samples.
It sounded like the rest of the guys were taking their jobs very seriously. The night began with them sitting around Rocky’s desk with notepads and pens. Each batch was brought out and I heard constructive comments such as, “This has potential” and “It’s a bit bitter for my taste.” As the night wore on, it turned into laughter and such gems as, “This color is too dark…it reminds me of my piss” which was followed up with, “If your piss looks like that, then you better go to the hospital, you dumb fucker.” The more they drank, the rowdier it got.
“It’s been far too long since we’ve had fun like this,” Sergio complained, “We’re too uptight and boring. We need to have some fun. I want to do something fun.”
“Why don’t you say ‘fun’ a few more times, asshole? How drunk are you already?” Dmitry asked.
“I’m not drunk. I’m just a little relaxed. It’s not a crime to unwind every once in a while. You know what would be a good way to unwind?” Sergio slurred, and then continued before anyone had a chance to reply. “Vegas would be a good idea. I think we should take a vacation. A tiny little trip. Just for a weekend. I vote we do Vegas. What does anyone else feel like?”
“That may just be one of the only good ideas you’ve ever had in your life,” Dmitry offered, amazingly in agreement with Sergio. “It’s been too fucking long since we’ve been away from this town. What do you think, Rocky?”
I got up from my desk to peek into the office. I was curious as to what Rocky had to say in reply. He’d been working so hard lately, a fact that had not gone unnoticed by me, and I really think he deserved some time off. Even if it was only for a weekend. I highly doubted he would agree to leave the business. Maybe I should help convince him that a bit of down time would do him some good.
“I bet you guys would be so much fun in Vegas,” I said, throwing my opinion into the mix. “I was there once with my parents when I was fifteen years old. I don’t remember much because I wasn’t old enough to really enjoy it. I remember going to Lake Mead one day and that’s about it. I have pictures in a box somewhere.”
To my utter shock, Dmitry and Sergio instantly shouted, “Let’s all go!” and “We should all go!”
What did they mean by “all” and since when did those two have the same opinion on anything? This was odd. My internal alarm bells started blaring at all once.
I frowned in confusion and asked, “You mean just you three, right?”
Sergio insisted, “Nope, you are more than welcome to come with us. How about it, Violet? We’d have a lovely time.”
Dmitry rolled his eyes and said, “You’re absolutely invited, Violet. Why wouldn’t we want you to join us?”
My frown deepened into a scowl. Since when does Sergio use the world ‘lovely’ and since when did any guy want a chick to go to a dude’s weekend in Vegas? Did I warp into another dimension? I’ve seen Dmitry and Sergio drunk before and they didn’t magically get polite, they got stupid and started trying to out-do each other. They sure as fuck never agreed on anything.
I looked at Rocky, who mirrored my own confusion. He raised his eyebrows questioningly at me, as if to ask if I knew what the hell they were up to. I did not.
“The math is not adding up here. Why do the three amigos want Princess Buzzkill to join them in Sin City?” I questioned.
Dmitry got up from the desk and motioned for me to follow him into the main reception area, well out of earshot of Rocky and Sergio. The plot thickens!