You are here: Products My Boyfriend is a Monster by J.h. Coates 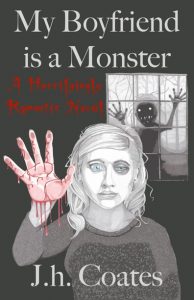 My Boyfriend is a Monster by J.h. Coates

Her ex-boyfriend beat on her. The new guy might literally eat her. Boy can Lily pick them.

After fleeing her abusive boyfriend, Lily tries to salvage what’s left of a life she has always dreamed of. That’s when she meets Nathan. By appearance, he is the perfect man to save her; however, what she doesn’t know about him might literally kill her.

Nathan is no ordinary being, but rather a beast from a barbaric and tragic past that has unfolded throughout time. Set against modern day Chicago, these two are about to have their violent worlds collide. Vendettas are set in motion, and relationships are put to the test. If true love can conquer all, Lily and Nathan must confront the monsters in their lives.

The new fantasy novel from J.h. Coates provides a slew of Kill Bill-like characters; and, deals out as much action, sex, comedy, and suspense, as any True Blood episode might. The multiple plot lines all converge to a Shakespearean-style climax, setting up multiple chapters in the series.

James henry Coates is an author of paranormal, fantasy and comedic horror fiction. He was raised in the tiny town of New Lowell, a population of almost eight hundred. He began writing at an early age and was almost positive that he would be doing it for a living someday. Later he attended film school where he concentrated more on producing, but used his talent and love of writing to try and help projects that were stuck or in need of creative help. But it wasn’t until he was hospitalized and stuck living in a hospital that he began to truly write again. Left with nothing to do, day or night, J.h. Coates used his laptop and abundance of time to start and finish ‘My Boyfriend is a Monster’. J.h. Coates resides in Innisfil, Ontario and has just finished the super awesome and cleverly titled ‘My Boyfriend is a Monster 1.5, a novella that takes place between 1&2 as well as ‘My Boyfriend is a Monster 2’ which will be out this fall.

I always loved to write and one year I was admitted to the hospital for a very long time, with nothing but time on my hands.

Be the first to review “My Boyfriend is a Monster by J.h. Coates” Cancel reply