You are here: Products My Best Friend’s Ex by Hazel Kelly 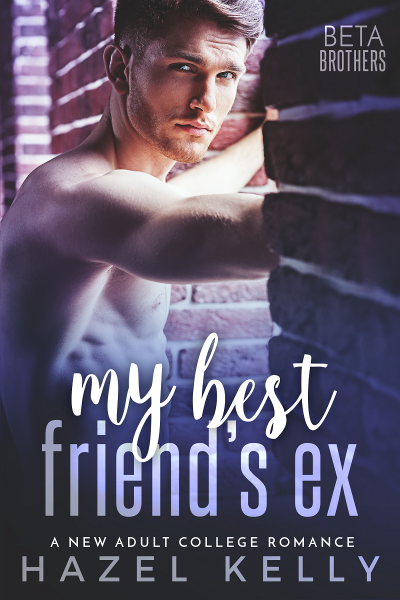 Logan’s been off limits ever since he got sheets deep with Zoey’s best friend, but what Zoey doesn’t know is that her crush isn’t as one-sided as she thinks.

On the contrary, Logan’s felt her watching him all along, and now that she’s all grown up, this shy loner’s finding it harder than ever to keep his hands to himself…

Hazel Kelly is the author of the bestselling Soulmates Series and other popular romances featuring irresistible men and the feisty women they'll do anything to impress.

Her books are perfect for readers who like a touch of young adult angst mixed in with their new adult romance.

I’ve always been good at sharing. You have to be when you grow up in a family like mine.

From the moment I saw him, my skin prickled and my insides burned, as if I’d found something I hadn’t realized I was looking for.

Unfortunately, I had to keep that to myself since, like all the kids my parents brought home, he was considered family from the moment he took a seat at our table. So from that day on, I did everything I could to force a familial bond.

Piper didn’t have to, though. She noticed immediately how special he was, and it wasn’t long before she was caring for him in a way I couldn’t, a way I wasn’t ready for.

A way that made me insanely jealous.

Night after night, I’d watch her leave my house and sneak over to the annex above our garage to visit him, and I’d stare at the small, curtain-covered window until my eyes burned with tears.

I wanted to be happy for them. After all, Piper and I had been best friends since I was six, and she was so content with him… at least, in the beginning. But it was hard because their relationship taught me that I wasn’t as good at sharing as I thought. I just never cared about anything enough to want it all to myself before.

Not that I held it against them that they got together. I know better than anyone that you can’t help who you love. You can only help who knows about it.

And since he’ll always be off-limits, there’s no point in sharing my secret.

It doesn’t matter if my body screams for his touch whenever we cross paths.

It doesn’t matter that my heart swells to six times its normal size at the mere thought of that handsome loner’s shy smile.

It doesn’t matter if I think I could love him better than she did.

Because Logan Jones and I are never going to happen.