You are here: Products Murder Without Pity by Steve Haberman 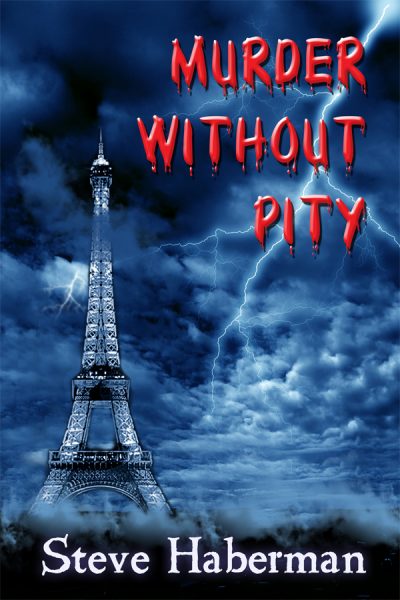 Murder Without Pity by Steve Haberman

Paris, France: dark with fog, riots over police killings, dirty Russian money, and Far Right demagogues.
Here state criminal investigator, Stanislas Cassel, grandson of a French propagandist for the Nazis during WWII, works at the Palace of Justice. Ashamed of his family’s infamy, he avoids anything political. Instead he absorbs himself solving small crimes. Little does he suspect the life-changing shock awaiting him when he looks into the bizarre murder of a pensioner, who seemed to have lived an uneventful life. “Murder Without Pity,” by Steve Haberman, a mystery thriller for today’s turbulent, dangerous times!

I earned a B. A. Degree from the University of Texas in Austin, majoring in political science and minoring in history. Afterwards I passed my stock broker's exam and worked for a time at a brokerage house before returning to school. Upon getting my legal assistant certification from UCLA, I worked at a law firm in Los Angeles. Successful stock market investments allowed me to retire early (thankfully) and to pursue two dreams, writing and foreign travel, and I have since traveled extensively and frequently to Europe.
I enjoy the cosmopolitan bustle, sidewalk cafes, the museums of Berlin, Rome, Vienna, London, Budapest, and Paris. Many of these capitals find their way into my stories of intrigue…"Murder Without Pity" (Paris), "The Killing Ploy" (London, Berlin, Paris, and Lugano) and the soon-to-be-released "Darkness and Blood" (London and Paris) and "Winston Churchill's Renegade Spy" (London and Zurich). I'm also researching for a fifth novel, this one to be set in 1946 Berlin.

Since I don't want to reveal too much of the plot, I'll just say that I have an interest in European history, have visited many sites where history was made, sometime for the good, other times for the bad, and I've incorporated all this, as well as numerous visits to Paris, into this murder mystery, Murder Without Pity.

The two men jumped Stanislas outside the burned-out apartment building, and he realized he had made a mistake. He raised his cane to strike, but it was too late. They muscled him up a flight of stairs and into a drafty room, and then they got serious.
The one with the German accent threw him hard onto a stool, making Stanislas cry out from pain that spiked up his bad leg. Next the accomplice yanked his arms behind, and he went to work, and everything went dark.
And afterwards, when Stanislas jerked to struggle loose, the man with the accent clamped a hand on his shoulder and warned in French, “Monsieur Cassel, don’t.” This warning frightened Stanislas even more. This stranger, who had helped ambush him, knew his name.
“Monsieur Cassel,” the man continued, “you are a powerful examining magistrate here in Paris. You have investigated and solved many crimes. You know the high and mighty and have even indicted some. But you do not sit in your Ministry of Justice Annex office. And you cannot command the police to rescue you. You are in an abandoned tenement, alone and powerless. Our house rules: Not a word, please. I talk. You listen. You answer. A simple shake of your head for a ‘no.’ A simple nod for a ‘yes.’ House rules, as I said, because we cannot waste time. Understand?”
And Stanislas, through his shock at having walked into a trap, just nodded. House rules.
The man with the accent squeezed his shoulder hard. “Luc has roped your hands behind you. Understand?”
Stanislas nodded yes.
“He has blindfolded you. Understand?”
Yes.
“He has taken away your cane. Briefly, monsieur, you are our prisoner. Do you understand how serious your situation is?”
Again, yes.
A cell phone beeped. Luc answered on the second ring, as though, Stanislas guessed, expecting the caller. In the near silence, as Luc listened, someone somewhere outside in the fog pounded an angry beat on congas. Through the throb, Stanislas could hear behind him Luc mumble words that sounded like code. Something about bringing the car around. About keeping the headlights low. Do this, Luc ordered. Do that. And Stanislas thought, they’re going to kill me.
Luc flipped shut his cell with a harsh click. “Three minutes,” he said. “Now what, gag him?”
“At this hour? Who would hear him? Monsieur Cassel, listen carefully. House rules, remember? You have an interrogation tomorrow afternoon at your Justice Annex office. Yes?”
They knew not just his name and profession, but where his office was, Stanislas realized. He nodded yes.
“Your witness to question, the esteemed Monsieur Louis Boucher?”
They had somehow gained access to confidential information too, he saw. Yes.
“You will question him about the murder of the pensioner Léon Pincus. Agreed?”
Still more secret dossier material revealed. Again, yes.
“You will go easy on Monsieur Boucher.”
Not a request, but a demand. Stanislas hesitated.
The man with the accent clapped him on the side of his head. “I said, go easy on him, please. Do not be stubborn. Save your crime fighting heroics for someone else. What time did he leave his apartment that morning? Does he take his strolls daily? Was he terrified when that Monsieur Pincus confronted him? You see? Easy questions.”
Stanislas sighed and at last nodded.
“Do not work yourself up over this case,” the man continued. “It is not worth it. After all, this Monsieur Pincus was what? A nothing, what you call one of your Little Miseries, living out his life in squalor. Investigate other dossiers, and we will forget you.”
Stanislas shifted his head right. The man had moved behind him with ponderous steps.
“Two minutes,” the man named Luc said, also sounding as if he had stepped back.
“In that case, a moment to spare. Any questions, Monsieur Cassel? You may speak.”
“Who are you?” Stanislas asked, his own voice sounding thin and weak.
“Who are we?” The man chuckled. “Luc, hear that? Why we are friends of the esteemed Monsieur Boucher.”
“Good,” Luc replied, also laughing. “Friends of Monsieur Boucher, I like that. One minute,” he added.
Stanislas tensed his fingers on his thighs for the blow. The conga player ripped off several beats and stopped. The quiet unnerved him, and after a moment more he blurted out, “Are you there?”
He heard his heart beating out his fear. But he detected nothing else. He waited, motionless, sweating….