You are here: Products Murder By Dissent by Patricia M. Muhammad 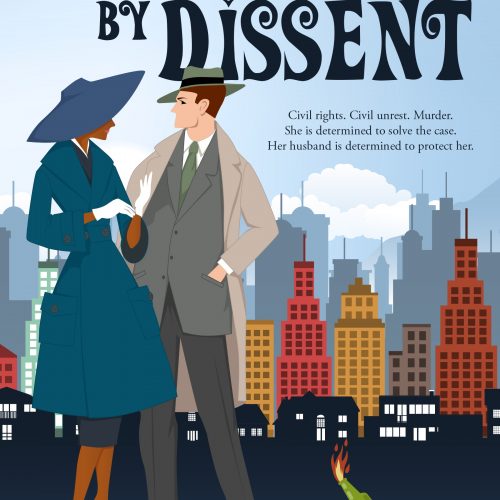 Protests, riots and someone who hides under the flame that scorches the possibility of improving race relations in America during the Civil Rights era. Jacqueline Sadie Thompson is a detective in a coloured precinct in New York. Lieutenant Davidson assigns her and Johnson murder cases which occurred during protests. They visit the scene. Someone tosses a Molotov cocktail where they stand. The building collapses. Thompson’s British husband, William rescues her. Her partner suffers a coma. Johnson awakens. He recalls the disturbing notions his wife had concerning racial identity. Thompson faints at the station house and is put on leave. Her husband cares for her. Anderson, another detective, furthers their investigations. Johnson convinces one of his cousins to retrieve a book. The detective is aloof and does not disclose to anyone what he saw before the explosion. Jacqueline deduces a portion of it. Jacqueline is determined to solve the case. Her husband is determined to protect her. Who do they both need protection from?

Mild note: The protagonist and her husband share intimate moments-often. Although there is only mention of legs, arms, embraces and kisses, the remaining descriptions I use allegory and references to nature to describe their intimacy. This may be considered mild to moderately “Steamy” depending on the potential reader’s inclination.

Moderate to severe discretion (abridged): This book is a work of fiction. However, the author intended to create characters and settings historically accurate to the era it takes place in, the racially tumultuous 1960s. Certain terms used as racial descriptions now considered archaic, outdated or even offensive are used to reflect the past usage by both black and white Americans of that era.

Additional note: A portion of the main plot revolves a pivotal scene in which a few people are injured due to an explosion which destroys a building. This notice is to advise those who may suffer from post-traumatic stress disorder (“PTSD”) concerning traumatic events based the recollection of certain sounds or the imagery which may encompass them both.

Patricia M. Muhammad is an American fiction author of crossover contemporary romance/science fiction, science fiction/fantasy, mystery and historical romance genres. She has currently written 20 novels. She is currently working on her next book manuscript. Before penning fiction, Patricia emerged as an international legal history scholar and academic author, focusing on human rights, international law and restorative justice. She has currently written and published a combination of 22 research papers and academic book reviews in these subject areas. Her work has appeared in the American University International Law Review, Columbia Journal of Race and Law, the Willamette Journal of International Law and Public Policy as well as the New York History Journal. Her non-fiction writing has been cited dozens of times in various respectable academic journals.

I wanted to to write a second mystery/detective novel after The Speakeasy Murders. This is a new genre for me. I intentionally chose a different era in American history to help me with a backdrop to build from. I write the characters almost as I write in any other book or genre. I usually start with a name or image of the protagonist, her love interest and other characters she would likely interact with as the plot unfolds. The 1960s could be considered inspiring, but it was also devastating. America lost great leaders who fought for change and some who would use racial strife to further their personal agenda and to conceal their ulterior motive existed then inasmuch as they do now. I hopefully just wrote the story highlighting similar issues in an accessible context.

Sebastian's cousin hurriedly entered his house, bypassing going home for the evening. After what he heard from Johnson, he thought the matter of the book was the priority. He explained to Craig where he would be able to find the key to the front door. “An old potted plant,” Craig said. He looked up at the wooden beams of the porch ceiling. “For a detective, you are not very clever.” He then entered, quickly locking the door behind him. The house smelled surprisingly clean. “My fancy cousin must have a cleaning lady.” Craig allowed for the darkness to continue to permeate the lower level as he approached the kitchen. He admitted it was an eerie feeling, and not just because it was someone else's house. A member of this household died tragically and under questionable circumstances. However, Sebastian's cousin needed reassurance that he was the only one present—and he was. Craig made sure to keep the house key in his right pants' pocket until it was time for him to depart. The wooden steps creaked as his feet alternated as he climbed. He reached the landing. “Hmmmm…It is too dark.” Sebastian's cousin felt around the walls with his left hand. “There it is.” He looked at the number of closed doors, trying to remember how many Sebastian instructed him to count until he reached the master bedroom. He missed it by one, accidentally entering the hallway bathroom. When he located the proper room, he exhaled. Sebastian had enlisted his cousin to become a familial archeologist. There was only one trunk he could see, and it lied at the foot of Sebastian and Margaret's king-sized bed. Craig looked around the master bedroom one last time before he began his assigned excavation. He thought that his presence though at his cousin's request, violated the personal nature of the home. He quickly began his pursuit. The trunk had three bracket brass locks, though the furniture piece itself was covered in light brown cowhide leather. Sebastian's cousin uncovered a few large photo albums. He placed those onto the bed. Suddenly, Craig heard a large 'clash'. He bounced back and looked around. Nothing within the bedroom seemed to have fallen from its place. Sebastian's cousin then heard the howling of the wind. It knocked a large tree branch against the side of the house before it broke off and fell lifelessly to the ground. Nevertheless, this prompted Craig to quicken what he had searched for. “He said the cover was cloth, medium gray…” Craig then removed a couple of costume jewelry boxes. “These are not it either.” He now concentrated his focus on the center of the trunk. At the very bottom lied the book wrapped in plastic. Sebastian's cousin already felt awkward being there, let alone rifling through their belongings. He was not inclined to read the contents of the text—at all. Craig gently placed the book on top of the tall wood cherry dresser. Now he was tasked with putting everything in its proper place, back into the trunk. After he closed it, he did not understand why neither Sebastian nor Margaret used the back of the trunk to secure everything. He shrugged his shoulders, grabbed the book, and descended down the stairs. Sebastian's cousin then stopped. He did not want to be incidentally seen leaving with something from their house. Craig did not know who could possibly be watching—him or Sebastian's home. He felt around the inside of his jacket. He then remembered that it had a false liner with a zipper. “Perfect.” He quickly tucked it inside. Then he patted his pants. Craig did not want to forget to put the key back. He still disapproved of the potted plant as its hiding place. “As you wish, cousin.” Craig reached home. Nobody followed him thankfully. He was relieved. Now all he had to do was to get this book to his cousin without anyone noticing. He placed it in a nondescript brown paperbag and sat it on his coffee table. Craig was done for the evening. Sebastian still laid in his hospital bed, wondering where his cousin accomplished the task. That same nurse was now from earlier was now present to give her patient a pain reliever. The nurses had become Johnson's constant—this until he returned to the station house.