You are here: Products More Than Whips and Chains by Will Danielson 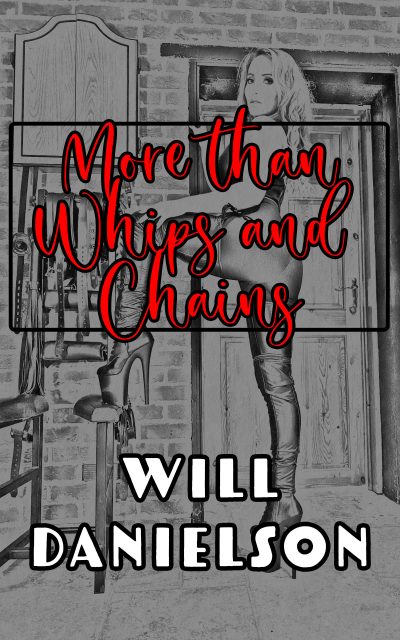 More Than Whips and Chains by Will Danielson

We all have our kinks and fetishes. Some people will never act on them, and others will embrace them wholeheartedly. More Than Whips and Chains is the true story of one young man who decided to embrace his kinks and explore the world in which they could thrive. The story starts with a burgeoning realisation of sexual interests that fell outside of the mainstream and chronicles his experiences. From nervous exploration in relationships to kinky threesomes, fetish clubs and a crush on a porn star, More Than Whips and Chains is a funny, exciting and intriguing tale of sexual discovery.

Will Danielson is a male submissive writing under a pseudonym about his journey from curious late teen to seasoned submissive.

I've read many memoirs from the dominant perspective but none from the submissive side of the coin. It was fun to tell the naughty stories with touches of humour and humility.

What series of triggers and experiences form these preferences? There is a school of thought that people in a position of power in the professional lives like to be dominated. The logic is they hold such power during the day that they like to balance it out by relinquishing power in a sexual environment. There is also a theory that people who were abused can mimic those traits and develop a sadistic nature. Alas I am neither an example of any of those nor a qualified enough to talk any more about psychology and behavioural patterns.

What I can talk about however is my experiences and how I have interpreted them. I wasn’t beaten as a kid, I don’t have a traumatic experience that framed my psyche and I certainly don’t head up a billion dollar hedge fund employing a trillion people. It could be described as uneventful childhood, but it was certainly a happy one. I never wanted for anything and was well looked after. I grew up in a settled family home with two parents and no siblings to steal my parents attention. Could it be that because I was relatively used to getting my own way and didn’t have to make any sacrifices that I almost fall in to a lesser version of the ‘people in a position of power’ hypothesis? It is plausible and with no other alternative I think I am going to stick with that as my working theory.

From role play with teenage girlfriends to attendance at fetish clubs I have tried most things. The conflict for me has been ‘real life’ and its limitations. A part of me is intrigued by the 24/7 aspect of submission, but for me it hasn’t been practical. Does this make me less of a submissive than someone else? Maybe it does, maybe it doesn’t. What I plan to explore and detail is my experiences and my emotions throughout. There have been times where vanilla life took over and there have been times when I’ve been in intensely kinky situations. I look forward to sharing them all with you over the next few chapters.