You are here: Products More Than Everything by Delphie Gray 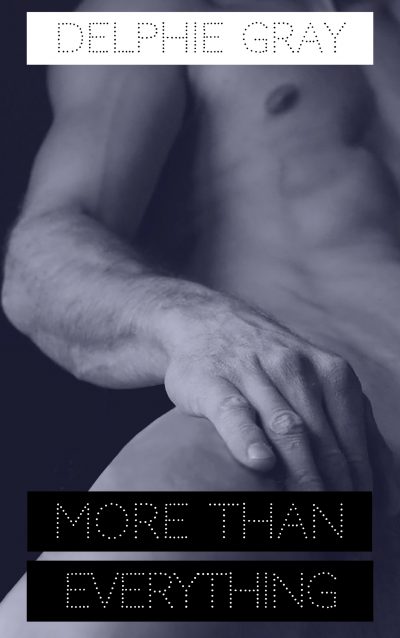 More Than Everything by Delphie Gray

Liv isn’t looking for Mr Right or even Mr Right Now. Between the ghost of her ex and her platonic friend, who wants to be much, much more, she’s got enough to deal with. And her career’s finally getting somewhere. Then she unexpectedly meets Benedict, a self-made man, and everything gets complicated. He’s intense, demanding and carrying his own stash of dark secrets but he’s also the most passionate, amazing sex Liv’s ever had. Can they make it or will the past keep getting in the way?
More Than Everything is a funny, tender and sexy must-read for anyone who loved the Crossfire series, Sinners on Tour and The List.

It was only 10 o’clock and already the heat was rising up from the sticky pavement. There was that unmistakeable smell of an urban summer – warming tarmac, car fumes and a faint undercurrent of wee from the late night drunken studentsdrinkers caught short on their way home. Liv picked her way carefully around the bags of restaurant rubbish spilling out across her pathwaiting for collection. The foxes had been out againbeen out in the night and onion skins, carrot peelings and chewed paper napkins were littered across everywhere. She joined the gaggle of people waiting to cross the road. The lights, as usual, took ages to change and Liv checked the time again. Only 20 minutes until her shift started and she needed to get a ridiculously strong coffee first. She hadn’t slept all night, replaying every single answer to every single question she’d been asked at the interview the day before. Plus, with a double shift todayat 5, she wouldn’t get to sit down properly again until she fell onto her bed sometime after midnight. She needed all the caffeine and rest she could get.

When the lights changed, Liv dodged the slow coaches in front of her and sprinted into Pret a Manger.
A couple of minutes later Liv slid onto a high seat in the window and popped the plastic lid off her giant, steaming, black Americano with an extra shot. She stirred it with her little wooden stick and blew vigorous on it as hard as she could to cool it down. The temperature of the coffee, which, judging from the bloom of steam quickly spreading across her face, wasn’t far off molten lava. Healthy and safety would probably be all over it but she was determined to get some inside her before she started work. She almost lost the whole lot a minute later when someone jostled the back of her chair. Liv steadied the huge wobbling cup and snapped her head round to give the culprit her best death stare. It was totally wasted. The culprit, for
I was just leafing through the last few pages when I felt someone jostle the back of my chair. I looked up and saw a tall, scruffy guy, was grappling with a mountain of things. He had a computer bag in one hand and a loaded tray in the other. A huge backpack hung in the crook of the arm carrying the tray. Liv could see that he was struggling to put down his tray without the backpack slipping down his arm and knocking it over. If he’d at least apologised for knocking her chair and she’d been in a better mood, Liv might have offered to help. As it was, she watched out of the corner of her eye as his brain tried to work how to manoeuvre three unwieldy things with only two hands. It struck her that his stuff looked so clean and expensive – she couldn’t help noticing ‘Tom Ford’ discreetly stamped on the leather laptop bag and backpack – but he looked like a tramp. dump all his stuff on the counter next to me. He had a grubby, light blue trucker's cap pulled down low and messy blonde surfer hair spilleding out underneath it, obscuring hiding most of his face. What Liv could see of his face was covered in He had one of those silly hipster beards that made him look like a Victorian wrestler. His nose, the only feature not covered by bushy hair or a dirty hat, was strangely elegant – so I couldn't see much else of his face other than his aquiline nose, which was long, straight and with a very neat upturn at the end. It was the nose of a Disney prince on the head of a bin man.
When hHis tray safely made contact with the bar, Liv turned back to her coffee. In the air conditioned café she could still see the steam rising off it. She took a tiny, cautious sip and yes, it was still as hot as liquid rock. Sighing, she leaned forward again to blow on it. From the horrible scrape of his chair, Liv saw that Trucker Cap had plonked himself down in the seat next to her. He was trying to shrug off his

1 review for More Than Everything by Delphie Gray