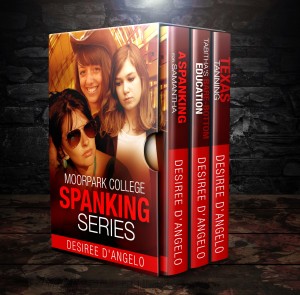 College girls these days seem to find out early that freedom is apparently unlimited on campus… until all of the sudden, the consequences of their actions catch up with them all at once!

The Moorpark College series shows what happens to girls faced with expulsion… jail… and other serious consequences for their naughty behavior. That is, they find out that spanking is the least painful alternative!

This boxed set follows the on-campus adventures of three friends–Samantha, Tabitha, and Brooke–who discover that the lasting learning that ends up mattering most to them does not take place in the classroom.

The boxed set is a combination of three related short novellas: A Spanking for Samantha,

Each one reveals a different path of growth and awareness for college girls at the fictional Moorpark College of San Francisco.

What they all have in common?

Desiree D’Angelo writes sizzling spanking stories. From San Francisco, when the weather is warm, you may find her with her laptop on the beach dreaming up her next spanking tale, her Australian Shepherd by her side.