You are here: Products MOMENTUM by Charlie Moore 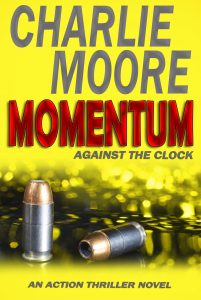 Charlie Moore was born and raised in Sydney, Australia. He started work on his first full length novel at age 18. When running through final edits for the book, he put it aside; wanting to live and experience some of the adventures his characters were thrust into. He became an accomplished martial artist, winning his first full contact fight by TKO and gaining over 30 medals before retiring from competition. He traveled the globe, got lost in dangerous parts of the world, swam with sharks, jumped out of planes, and became a Private Investigator. Resuming his passion for writing, Charlie started ghost writing to build and harness his skill, and in mid 2012 “MOMENTUM” was born. Charlie now shares his time between rock climbing with his wife, and writing deadly action-packed thrillers.

The idea that would become Against The Clock, and the whole series, came from a graphic novel I was developing at the time. It was in that vein; wild, crazy, fun, scary and thumping with action. The story of a spy working against powerful enemies in the pursuit of justice became a solid vehicle for me to explore just how far a person would be willing to go, and how much of themselves they were willing to sacrifice to bring closure to their pain. That quickly developed into the action packed espionage adventure series ‘The Clock’

Be the first to review “MOMENTUM by Charlie Moore” Cancel reply