You are here: Products Mission: Impossible to Forget by Jacki Delecki 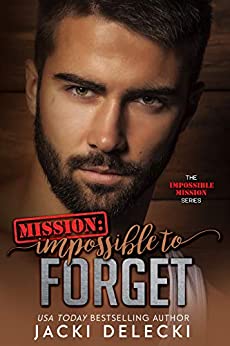 For professional cellist Emily Hewitt, sharing her musical gift with the world is all she lives for. Until her life is threatened. Caught up in a treacherous conspiracy, Emily must be assigned a bodyguard.

Former Special-Ops Marine Nick Jenkins is out of a job and out of patience. Discharged from the Corp because of hearing loss, the last thing he wants to do is babysit someone who’s surrounded by music he can no longer appreciate.

When danger turns deadly, will Nick be able to save Emily?

I love music. When I was younger, I trained as a jazz singer and dancer. I've performed many acting roles with the Seattle Opera Company and Pacific Northwest Ballet. So writing a musician was a natural transition for me.

Nick Jenkins climbed the stairwell to Emily’s second floor apartment, playing every scenario in his mind. What if Ben and Emily were in the bedroom? Undressed. He shut down the idea. He would deliver Reeves’ message, he’d get answers to reassure himself that she was safe, and then get the hell out of there.

His heart was ratcheting all over the place. This was never the way he expected to see Emily. He planned to see her at his brother’s wedding months from now as a distant stranger. The one thing he learned from all the losses he endured over the years: Time helped everything. But he wasn’t going to get the bloody time and distance.

He reached the top step. And his eyes couldn’t take in the sight. Emily was in the arms of a tall blond dude in the hallway across from her apartment. Not Ben, the famous singer. Where was her date?

By the way her head rested against the guy’s muscular chest, they were more than friends.

Red flashing lights exploded in front of Nick’s eyes. His finely-tuned control over his body and his delusion that he was over Emily shattered into primitive and possessive rage.

Be the first to review “Mission: Impossible to Forget by Jacki Delecki” Cancel reply