You are here: Products Missing by M.K. Chester 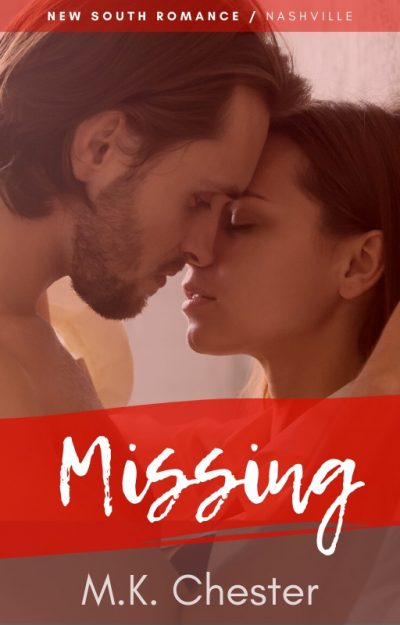 Private Investigator and ex-Ranger Noah Sullivan arrives in Nashville to identify the victim of a twenty-year-old kidnapping, one of a series of cases in a nation-wide investigation. He plans to locate the victim, hand off information to authorities, and move on. But Quinn Collier has other plans. How dare this handsome stranger ruin her life and not stick around for the fallout?

Uncovering the truth means questioning everything she’s ever known and destroying every barrier he’s ever put up. Finding lust amid the conflict is easy. Love is a whole different story.

M.K. Chester is an RWA award-winning author of historical and contemporary romance, urban fantasy and non-fiction. Her first novel, Surrender to the Roman, is published with Carina Press. Her three-book historical series, Bryeton Books, focuses on love, loss and redemption in small town America at the turn of the 20th century, while her contemporary romances, Crashed, 10 Days, and Missing, comprise her New South Romance Series. Most recently, she co-authored the dystopian/paranormal novel Icehaven with award-winning author Kim Cresswell.

I wanted to experience what it might be like to learn you were a missing person. What kind of situation would create a case like that, what is discovery like, and what happens in the fallout.

Goddamn. That girl could throw down some serious, top-shelf tequila. Noah Sullivan smiled as he slouched in the corner of the Wildhorse Saloon in good ole Nashville late on a rainy fall Friday. He cupped a half-empty beer bottle in his hand, shaking his head while his surveillance target got fully loaded mere feet away.
With Halloween only three days in the future, most of the customers wore trendy or revealing costumes, like the naughty nurse at the bar or the scantily clad cheerleader who managed to keep walking by.

Not her. Hell no. She wore tight, faded, well-loved Levi’s and black high heeled boots. An oversized University of Alabama sweatshirt slouched off her shoulder and her long caramel-colored hair brushed over her bare skin while she chatted with a group of about ten friends.

Her old, tired sweatshirt did nothing to hide the banging body underneath. The way her heels lifted her backside, arched her back high enough to let you know what being with her would be like.

This wasn’t the kind of inner dialogue his client would endorse. He hadn’t been hired to grow an infatuation. He’d been hired to track down someone who hadn’t been seen by her family in twenty-plus years. Someone hiding in plain sight.

Someone who, most likely, didn’t even know she was a missing person.

Be the first to review “Missing by M.K. Chester” Cancel reply