You are here: Products Miss Phipps and the Cattle Baron by Patricia Watters 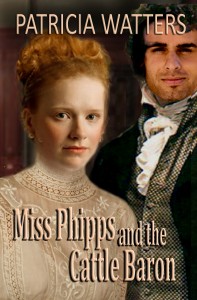 Miss Phipps and the Cattle Baron by Patricia Watters

Having a close resemblance to Queen Elizabeth I, and claiming descendance, served Priscilla well when as a girl she was teased mercilessly about her carrot-red hair and freckled white skin, so on arriving in Cheyenne, Wyoming, when she implies as much to avoid a humiliating situation, she suddenly finds herself sought after by the matriarchs of Cheyenne’s British cattle barons. But Priscilla didn’t come west to be sucked into British society. She came on a wagon train with homesteaders to start a newspaper addressing the needs of women, which means facing up to the powerful Wyoming Stock Grower’s Association and cattle barons like Lord Whittington who want every homesteader run out of the territory. But Adam Whittington has his own means of handling the troublesome spinster who’s stirring up a cauldron with her rabble-rousing newspaper. What Adam doesn’t count on is falling in love with the redheaded firebrand who’s alienating every cattleman in the area while threatening her own life.

Born and raised in New Orleans, Louisiana, Patricia Watters gave up city life and now writes from a hand-built log cabin nestled on thirty acres in the evergreen forests of Oregon’s Coast Range. An author with Harlequin and Avon-Harper Collins in the past, Patricia specializes in romance. Although writing is her number one love, over the course of her lifetime she’s raised laying hens, milk goats, and Tennessee Walking horses, built, plumbed and wired three houses, been a professional photographer, and written photo essays for national and international publications. She invites you to visit her website and drop her a line. She loves hearing from readers and responds to all notes: www.patriciawatters.com

I was inspired to write this book when I read that Wyoming was the first state to allow women to vote and to own land in their own name, and my heroine developed out of that. Wyoming was also the first state to hang a woman, so I brought that in as a side issue while setting the record straight with information from the family of the women who was hanged.