You are here: Products Misfit by Kathryn Kelly 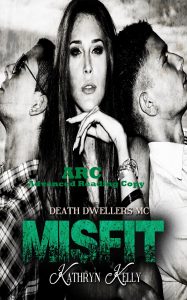 A Facebook friend read some of the other books in the series. We started a conversation and she said she’d love to see a M/M relationship between 2 of the bikers. However, there was a single female left and I didn’t want to end the series without her HEA, so M/M became MMF.

Be the first to review “Misfit by Kathryn Kelly” Cancel reply