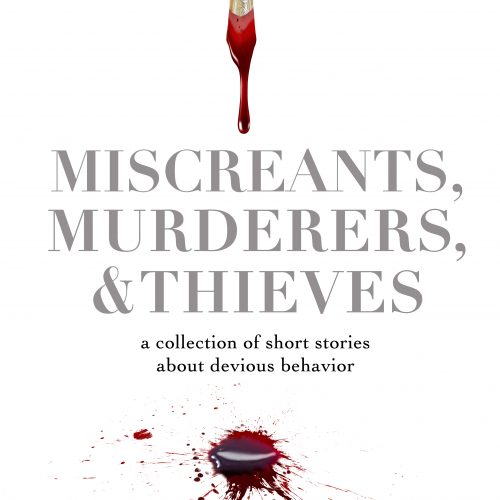 I was inspired to create this anthology because of the relationships I have built with other authors over the years, and the cumulative itch to scratch our desire to collaborate with one another on something… *anything.* After putting our heads together it became clear that creating an anthology where everyone was able to contribute a story that was meaningful to them, while also falling under the overarching genre of being "crime-ish," we each went about writing, editing, and collaborating with one another to create what ultimately became "Miscreants, Murderers, & Thieves: a collection of short stories about devious behavior." I hope you enjoy reading it as much as the thirteen authors had writing it 🙂

The front door shut with a soft but emphatic click as Jonathan slipped out of the house. Even though he knew Kaye wouldn’t have heard it—she slept like a hibernating bear—he still found himself looking over his shoulder to make sure she hadn’t wakened, that she wasn’t following him with her dead brown eyes.
But Kaye had merely grunted and turned over, burrowing deeper into the 600-thread count sheets and goose-down comforter. There was only one person who would send Jonathan a text
in the middle of the night; only one person whose text he would read in the middle of the night.
When the phone had buzzed, Jonathan had grabbed for it, fumbled for his glasses on the bedside table and read the message without turning on the light.