You are here: Products Mindgames by Jasmine Gold 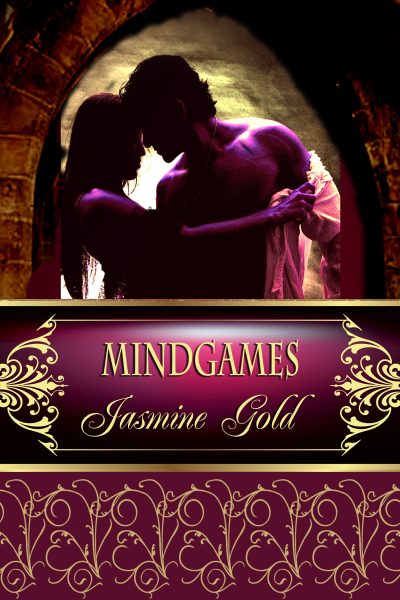 Gabriel, on a mission of mercy, is horrified by what he finds when he arrives in Riviera, a land far from his home. So-called “humans,” bored and decadent, amuse themselves with the senseless torture of their slaves. Yet Gabriel finds unexpected friends. An artist named Animal, who notices everything except Rose, his slavegirl. And Mariah, a slave foisted on Gabriel when he unwittingly prevents her from escaping.

Mariah knows that Master Gabriel’s talk of a different way of life, in which slavery does not exist, is merely the latest and cruelest of the mindgames that humans have used her whole life to toy with her. She must play along, but actually believing in it would bring disaster to her and to everyone she cares about.

Mindgames is about love, and friendship, and the potential for redemption. It is about how one person can change the world, or be destroyed by it.

Reviewers online call Mindgames “absolutely amazing. The perfect balance of substance and sex and never a dull moment.” “Simply magnificent.” The writer “proves that writing is an art form that possesses the ability to transfix and transform the reader to faraway lands.” “I LOVE this story, and I think about it all the time.”

I write because I can’t help it. I write in stolen half hours, while waiting for appointments or taking a quick break from work or other responsibilities. On the rare days when I have an opportunity to sleep late, I bribe myself into getting out of bed with the promise of time to write. Writing helps me get through the bad times and makes the good times better.
When I was fourteen I was sitting in my high school’s library before school, rereading a novel I loved, when a favorite character was introduced. I felt like I was having a wonderful reunion with a beloved friend. I knew then that I wanted to bring that kind of joy into other people’s lives. When I write I keep that moment in mind.
I am very grateful to live in a time when I can tell the stories that I want to tell and share them with the world on my own terms.
My favorite flowers are peonies, because of their flamboyance. My favorite food is perfectly ripe mango, although I have never been known to turn down an offer of Twizzlers. My current obsession is trying to figure out what to do about the crazy snake worms (they’re a real thing – look it up) that may or may not be infesting my yard.

I started writing Mindgames decades ago, in spiral notebooks and then on electric typewriters. I never thought I would do anything with it; who in their right mind would want to read a dystopian book about naked sex slaves? But I continued to write about Mariah and Gabriel and their friends because I just couldn't help it. Then the internet came along, and I learned that there were people — a lot of people — who loved to read the type of romance I was writing. Chapter by chapter, I offered on an erotic stories website smut that wasn't just smut, or maybe a book that was deeply serious about its characters and the world they inhabited but was also smut. In comment after comment readers told me that if I made the novel available they would buy it. Finally, here it is.

Mariah woke with a start. A hand was on her breast.
“I’m sorry,” Master Gabriel said, pulling his hand away. “I didn’t mean to wake you.” Mariah remembered his face when they met on the path, outside the gate, how broad and sunny it had looked. Now it was drawn and shadowed. On the path where she had trusted him, Mariah reminded herself. Defiantly she refused to speak, but the master didn’t seem to notice. “I’m going to touch you,” he said, “But I’m not going to hurt you.” Slowly he moved his hand back to just below her left breast, and lay it flat there. Mariah’s heart pounded. Her body was so tortured that she was sure even gentle sex would kill her.
Master Gabriel drew his hand away. “Below your chest is your ribcage,” he said conversationally. “And inside your rib cage are your lungs, which is what you breathe with. I think you have a cracked rib. I want to see if you can breathe okay. So I’m going to put my hand back on your rib cage, and I want you to take a deep breath.” He held Mariah’s eye. “All right?”
His voice was kind and urged her to trust him. The same voice as on the path. The voice that had promised freedom and had betrayed her.
“I hate you, master,” Mariah said.
Master Gabriel flinched as if he had been whipped. He looked away from Mariah, and Mariah felt that she had won a victory. But he looked back at her almost immediately. “It takes a lot of energy to hate,” he said. “And it takes a lot of energy to heal. You get better. Then you can hate me all you want.”
Mariah knew he was playing a mindgame with her. He would heal her so the torture could begin again.
Gathering all her energy, Mariah spat on the master. Or she tried to. The saliva got no farther than her chin, where it dribbled down. Master Gabriel, expressionless, took out a pocket handkerchief to wipe her off. She jerked her chin away from his hand, but the sudden pain made her dizzy. She closed her eyes for a moment. “I hate you,” she said, more weakly than before.
Master Gabriel said, “If you don’t wipe the spittle off your chin, pretty soon it will start to itch.”
Mariah said nothing, but as soon as the words were out of Master Gabriel’s mouth her chin started itching, almost burning. She glared at him. Master Gabriel let her suffer before he handed her the cloth. Scowling, she wiped her chin. He took the handkerchief back from. “I still want to feel your ribcage. Okay?”
Slowly Mariah nodded.
Gabriel put his hand below her left breast, flat on the skin. “Breathe slowly, as deep as you can,” he said. Mariah stared straight ahead and refused to obey. Gabriel said nothing, sitting still as a statue. Mariah resolved to outwait him. She closed her eyes, pretending to sleep.
Minutes passed. Mariah heard a soft sound from Gabriel. Opening her eyes, she saw that, without moving, he had fallen asleep, and was snoring softly. As she watched, he slowly slid from the edge of the bed where he was sitting down to the floor, his hand trailing down her side as he did so. At last he came to a rest leaning against the bed.
Mariah watched him warily. Was this part of his strange mindgame? Was she supposed to react in a certain way? As the rebellious runaway, should she do the opposite of what he wanted? Her arm ached, and her chest, and she had trouble thinking straight.
She started at the sound of a quiet chuckle from the open door. It was Master Animal, leaning on the door frame, watching the whole scene, his eyes glinting with amusement. When he looked to Master Gabriel sleeping on the floor his expression softened. Silently he crossed the room and sat in the chair on the other side of Gabriel. He leaned forward so he could speak softly to Mariah. “For a week he’s hardly slept, watching over you.”
“Why, Master?” Mariah asked, mystified that any mindgame could matter so much to a human.
Master Animal shrugged, his sardonic expression returning. “I guess he just likes your looks.”

Be the first to review “Mindgames by Jasmine Gold” Cancel reply