You are here: Products Mind Games by Dorian Smith 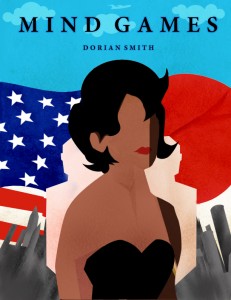 Mind Games is a new twist on the romance-suspense thriller genre. I intend to make it the first of what will be a series of romance novels where the focal couple meets under unconventional circumstances or has a shared murky background. These characters don’t adhere to the stereotypical protagonist/antagonist profiles.

Through a series of chance meetings and deception Kenji gets the girl – but at what cost.

Meanwhile Michelle and Annellyse must come to terms with the new lives thrust upon them while discovering who they are and what they want in life.

And Brad realizes that success and power can only take you so far if you have no one to share in your accomplishments.

Mind Games is a romantic examination of the butterfly effect, set against the backdrop of two cities known for their mystique – New York and Tokyo – and an equally intriguing underground organization.

Newly emerged writer, Dorian Smith, has been in the creative industry for quite some time! Prior to Mind Games, Dorian worked as a freelance article writer, drafting fashion, lifestyle and dating articles for numerous online publications. In addition to that, Dorian is also an entertainment marketer, which leaves her constantly surrounded by creative types and numerous sources of inspiration. She is an avid traveler, and can be frequently heard telling anyone within earshot about her love for Tokyo. An Indiana native, Dorian currently lives in New York where she loves to soak up the local culture and diversity that the city offers.

I took a vacation to Tokyo a few months before I decided to write my novel. It’s a mix of an amazing backdrop coupled with my very vivid imagination and day dreams.