You are here: Products Midnight Rescue by Nicole, on behalf of Elle Kennedy 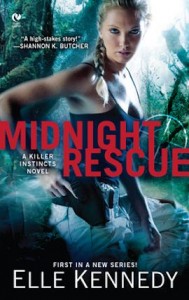 Midnight Rescue by Nicole, on behalf of Elle Kennedy

And she’s the good guy.

Abby Sinclair had a desperate childhood until she was rescued and adopted by a retired army ranger who molded her into a master of self-defense. Now, she’s a cunning and fearless assassin thrust into assignment after dangerous assignment, using everything she has—nerve, resilience, strength, sex—to come out on top. Her only rule: never trust anyone.

Abby’s latest assignment is in Columbia: go undercover and snuff out a dangerous arms dealer active in the underground sex trade. But when Abby purposely blows her cover in a last-ditch attempt to free the helpless victims, deadly mercenary Kane Woodland is recruited as back-up. His mission: get Abby out of that hell hole.

The last thing Kane expects is to feel primal attraction for Abby. But when she convinces him to join her on her perilous mission, their newfound passion could put the lives of their whole team at risk.

Be the first to review “Midnight Rescue by Nicole, on behalf of Elle Kennedy” Cancel reply