You are here: Products Mia’s Cop Craving 2 by Malia Mallory 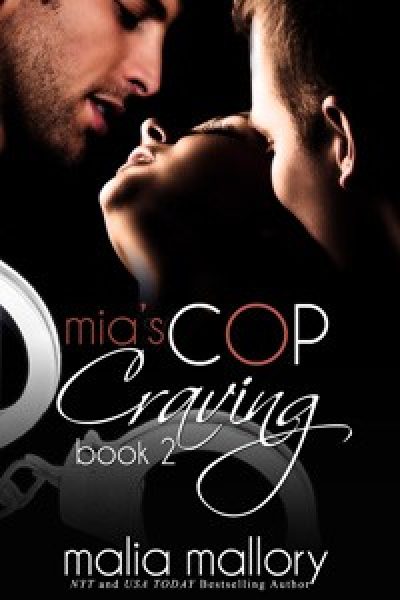 “Mia you are a sensual woman with a naughty mind.”

Mia told her deepest secret—she can’t resist a hot cop. Mia has a passion for hot policemen—and one sexy police officer in particular, Rogan. But, after meeting Jeff, it’s time to make her menage fantasy a reality.

After Rogan unlocked the door, both men stepped aside to allow Mia to enter first. A feeling of empowerment swept over her. This was something she’d wanted a long time, wanted more than she realized. Now it was happening. On her terms.
Rogan spoke first. “Mia, would you like to shower?”
“Yes.” She unbuttoned her shirt, slowly one button at a time, and let the garment drop to the floor. As she headed down the hallway, she dropped the rest of her clothing, leaving a trail for them to follow.
Both men got into the spirit of the moment and quickly followed Mia’s example. Rogan and Jeff entered the bathroom where Mia had already turned on the taps. Hot steam billowed out of the shower. Mia peered around the edge of the glass, the tips of her hair curling from the moisture. She flashed an inviting smile and disappeared back inside.
Rogan quickly stripped off his remaining clothes, leaving them in a heap on the bathroom floor. He stepped into the tiled shower and disappeared into the steamy mist, leaving Jeff to contemplate his options.
Jeff didn’t consider backing out for a moment, not now that he come this far. He wanted to see Mia. He wanted to touch her, stroke her. He tore off his clothes, anxious to get his hands on her body.
Jeff stepped into the shower, his toes gripping the slick wet tiles. The shower was large and, at first, the steamy air obscured his vision. He took another step and, through the mist, he saw Mia and Rogan in a close embrace.
Rogan stepped back from Mia and gestured toward her. Jeff moved closer and placed his hand on her shoulder. He swooped in and gave her a kiss. His hand rose to cup her jaw and, as he deepened the kiss, Mia opened her mouth and invited his tongue inside. His kiss was warm, spicy and very enjoyable.
Rogan grabbed the body wash bottle and squirted some in his palm. He rubbed the slick gel over her shoulders and down her back. Mia turned from Jeff’s embrace and faced Rogan. Rogan smoothed a thin layer of the slippery, fragrant fluid over her breasts and massaged her skin.
Jeff poured shampoo into his hand and reached for Mia’s scalp. He worked his fingers through her hair down to the tips and then returned to the top of her head. His fingertips massaged her scalp gently yet firmly. Mia moaned. She loved having her head massaged. It seemed so ordinary but was quite sensual.
Mia closed her eyes, overcome by the twin sensations of the scalp massage and Rogan’s hands skimming down over her stomach to the hair above her clit. His fingers slipped into the folds between her legs and he gently pressed his fingertips against her clit. Slowly and methodically, he rubbed her sensitive flesh. Mia struggled between wanting to close her legs or open them wider.
Jeff moved his hands to Mia’s shoulders. He kneaded her muscles with his hands. He stepped close in behind her. He radiated warmth. He slid one hand around her to her stomach while the other traced the vertebrae of her spine.
Rogan’s fingers dipped inside her pussy. He gathered some of her slick wetness and brought it up to her clit. His fingers rubbed and tugged the delicate skin between her legs. His touch became firmer as he sensed her growing excitement.