You are here: Products Messed Up and Magic by Holly Stone 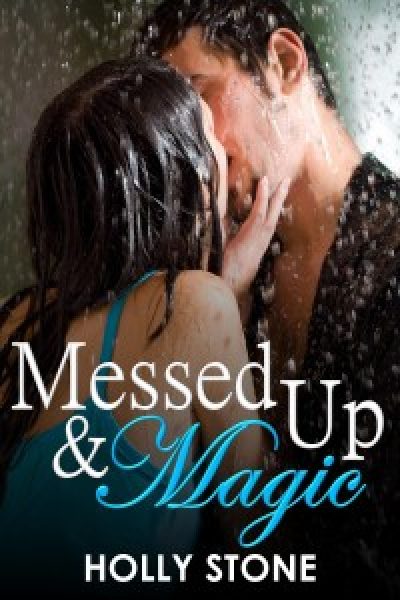 Messed Up and Magic by Holly Stone

Friday nights are about fish and chips, not finding sexy boys on your doorstep, particularly when the boy in question seems so lost.

Jack’s been Amy’s customer for years so they’re not exactly strangers, but he’s stunned when he finds himself homeless and she offers him a place to stay.

Amy’s desperate for change. Fed up with fulfilling her father’s expectations, she’s struggling to see a way out without letting him down. Suddenly faced with more issues than she can cope with, Amy turns to Jack for comfort. But as they get closer, and Jack’s troubles get deeper, he’s reluctant to make promises he can’t keep.

One lonely boy, trying to do the right thing.

One girl used to pushing her dreams aside.

Things are about to get all kinds of MESSED UP and MAGIC.

I love people and chocolate and stories that grab you by the heart and squeeze. Before I became a mummy I traveled to cool places and studied ancient things and danced in heels and drank gin with orange juice. When my kids are grown I am planning to do all those things again, just wearing longer skirts!

I love New Adult fiction. There is something so vital about that stage of life where everything is new and challenging, and when you’re still finding out about who you are and deciding who you want to be. I know I will be writing more New Adult in the future because the character growth was really satisfying to develop.

When Amy walked away I swore under my breath, wanting to follow her and explain my reaction, wanting to do anything I could to take away the feelings she was trying to drown in vodka. Maybe I hadn’t been fair; she had experienced something traumatic, after all. I’d made her feel bad for the way she was choosing to handle things but I couldn’t help it. I’d seen too many empty bottles at home, solving nothing, emptying my mum of hope and love, stealing her attention until she put a glass of clear liquid before her son and her own self-respect.
I didn’t want that for Amy. She was strong. She didn’t need it and I wanted to be there for her instead of the booze. I’d never been enough for my mum but I wanted to be enough for Amy, at least for as long as I was in this strange situation with her.
I emptied my tea down the sink and washed the cup, placing it on the draining board as soundlessly as I could. In the lounge, I assembled my bedding, put on some comfortable clothes that would serve as pyjamas and turned off the light. I could hear Amy pottering in the bathroom, turning taps on and off, flushing the toilet. When I heard her opening and closing drawers in her bedroom I knocked softly on the door.
“Amy, can I come in?”
There was no reply but I knew I didn’t want to give up and go to sleep on an argument. Mostly I needed to make sure she was okay, and if she was going to give me the silent treatment I knew I was going to have to push.
“I’m coming in, Amy,” I said, beginning to press on the door handle, opening it slowly so she had a chance to object. She didn’t.
The light was low in her room, a single lamp on her bedside table casting a yellow arc that illuminated her as she stood turned away from me, the slender column of her neck making her appear vulnerable, even though her posture was straight and sure. She was wearing a pretty camisole and pyjama trousers with cartoon characters on and I hated myself for noticing how good she looked when what I was supposed to be doing was comforting her.
“I’m okay,” Amy said, her tone firm. “Go to sleep, Jack.”
“I can’t when I know you’re hurting,” I said softly.
“I’ll get over it.” She turned to me then but the look in her puffy red eyes didn’t match the steel in her voice.
“It’s okay to be upset, Amy.”
“Is it? What good does it do anyone?” She swiped at her tears and turned away again, sniffing and resting her hands on the chest of drawers in front of her and I saw some of myself in her then; the inability to reach out to other people when things were going wrong, the instinct to curl into yourself and lick wounds in isolation. I knew in her situation I would need someone to really push me into accepting reassurance.
I stepped closer, needing to be by her side as her sadness echoed inside me, more than just the standard empathy one human feels for another. We were still almost-strangers but in that moment it didn’t feel like it. I reached out and laid my hand flat on her shoulder blades, wanting to give her more comfort than words could achieve. Her skin was so warm and soft, and rather than flinch, she turned into me, leaning against my chest as she had downstairs. My hands enveloped her instinctively and I pressed a kiss against the top of her head as if it was the most natural thing to do. She was almost completely still in my arms, and silent, as if my physical presence was all she needed at that moment, and although it was my intention to be there for her, I couldn’t help taking some solace in return.
A dog barked in the street outside and seemed to wake us both from our almost trance-like state. Amy shifted in my arms and then whispered forlornly, “What am I going to do, Jack?”
“Everything will be okay. As long as you’re safe, that’s all that matters. Money can be replaced.”
“It’s not that,” she whispered. “I don’t think I can stand it anymore.”
“Stand what?” I eased away from her and looked down into her watery grey eyes.
“My life. All the expectations. Doing something I hate every day and having to seem grateful for it all. I feel like I’m disappearing.”