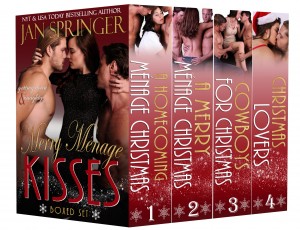 A Homecoming Menage Christmas ~ Rachel has a secret Santa fascination, so she’s getting a sexy Santa ménage this Christmas.

A Merry Menage Christmas ~ All work and no play encourages Dr. Kelsie Madison to indulge in a sizzling menage this holiday season.

Christmas Lovers ~ A soldier and his nurse are falling in love and a naughty Christmas gift will ignite their passions at a mountain chalet.

She is a member of the Writers Union of Canada and Romance Writers of America.

I enjoy the challenge of writing ménage romances and Christmas is my favorite holiday so I decided to put the two favorites into a boxed set of 4 holiday ménage romances.

Dear Diary,
I have a Santa Claus fetish. That’s my biggest secret. Only you can ever know, except of course for a couple of boyfriends who just didn’t like dressing up as Santa out of season. They said I was immature, weird and totally off the wall wanting to be made love to by Santa Claus. I wish I was normal just like everybody else.
She closed the diary she’d inadvertently discovered in Rachel’s bedroom and frowned.
Wow, she’d had no idea Rachel was into Santa. She’d heard about women who got turned on by the red-and-black clad, white-bearded guy but…sweet and quiet Rachel?
She would never have guessed. Not in a million years.
She placed the diary back beneath the cushion of the chair by Rachel’s writing desk. She hadn’t meant to pry, truly she hadn’t. She’d just been doing the housecleaning for Rachel’s homecoming and she’d found her diary purely by accident.
She should have left it alone, but she was curious by nature and hadn’t been able to resist flipping through the entries until she’d stopped at the Santa Claus fetish entry. How in the world was she going to help Rachel without her finding out that she now knew about her Santa fetish?
She frowned and went about her cleaning.
Chapter One
Several days later…
“Who are you again?”
Raw emotions bubbled inside Rachel’s chest as she stared at her father. He sat like a rag doll in his wheelchair. His gray hair was in disarray and a stream of drool dribbled from the sides of his mouth. Normally she’d comb his hair, wash his face, brush his teeth and then read to him. But today she was just too tired to do anything, and she was so incredibly sad at how his life would end. As he looked up at her there was no hint of recognition in his pale blue eyes. No clue that she was his daughter.
“Dad,” she whispered and attempted a smile. It was seriously wobbly.
“My name is Rachel,” she said in a louder voice. Please remember me, Dad.
She extended her hand. He hesitated before placing his limp, cold fingers against her palm. They shook hands. His grip was weaker than yesterday, and even weaker than the day before.
“Are you the nurse?” he asked softly.
Oh, God, no.
“No, Dad. I’m your daughter, remember?”
A surge of hope swelled through her as acknowledgement flared in his eyes. Just as quickly, the recognition faded. Utter despair embraced her.
“Hello. Do I know you?” he asked again. That absent look was back again.
Dad, please. I need you back.
Rachel sighed. “No, you don’t know me. I’ll drop in again tomorrow. Bye for now.”
She should stay and spend some time with him, but all she wanted to do was go home, crawl into bed, pull the blankets over her head and just sleep the rest of her life away.
Bitter tears bubbled up and after she passed the several wheelchairs riddled with elderly people, she let the hot tears roll.
Damn you, Dad.
* * * * *
Rachel awoke to the sound of the pilot announcing they would soon be landing and to please put on seatbelts. She did as instructed and ignored the little old lady who sat beside her and smiled sympathetically at her.
Her dad had died that night. All alone. In his sleep. The guilt of not spending time with him that day and not being there when he’d passed had gnawed at her so bad that her friends had footed the bill and sent her off on a trip to Europe.
Rachel smiled and her heart warmed as she remembered the elderly widows her friends had sent her to. One in Italy. One in France. The other in Switzerland. They’d been kind to her and had kept her busy, teaching her how to cook, how to style her hair and how to make homemade wine.
Now, after several months abroad, she was on her way home. Back to her hometown and to all her friends who’d supported her. Guilt still lingered about her dad and her sadness over time had turned a little less intense. She was going home. Back to where her dad had passed away. Back to the memories.
Rachel shook her head. No, she had to stop thinking like this. She’d done her best for her father. The realization had hit her when she’d been on a gondola in Venice and she’d watched a woman around her age helping her elderly fragile father into the boat. Dark circles hugged the woman’s eyes, but she smiled as the elderly gentleman had smiled back at her. Dad had been happy while he’d still been with her. Until his last shred of memories had gone. He’d been happy and she’d done her best.
That’s all that mattered. Now it was her turn to be happy.